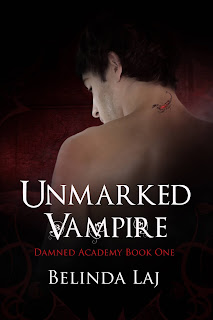 I was incredibly lucky to receive an e-book copy of Unmarked Vampire directly from the author Belinda Laj in exchange for an honest review.

Unmarked Vampire follows the story of Julian Laurent who wakes up in a dungeon and discovers that he is a vampire. The dungeon is the way into the Damned Academy where immortals receive their relevant mark and then the education to deal with their new found needs and talents. There are vampires, demons and angels and they're all ruled over by Blake Night (I adore this name).

The story contains many interesting twists and turns which are well done and though some things are hinted at, you're never fully sure if you're right until the reveal. The world design and how the powers and things work are all very well thought out and well written and I really enjoyed the way each immortal was defined.

The characters are all well developed and are interesting in their own right...except Julian! I so far hate Julian, I know he's been through a lot and he had a lot to take in, but he's just so whiny and child like that it's hard to take him seriously at times. That to me is my only "complaint" about the book as he's supposed to be 19/20 but to me comes across more as an early teen or tween. Genuinely though it doesn't affect the story or take you out the zone while reading, it's just my personal taste.

Unmarked Vampire was originally released in Italian so I was slightly concerned that something might have been lost in the translation, but I was proven wrong and I think the translation was very true to the original story and I didn't feel like I had missed anything.

Overall I really enjoyed Unmarked Vampire and I will look forward to reading more of the Damned Academy books as they come out.