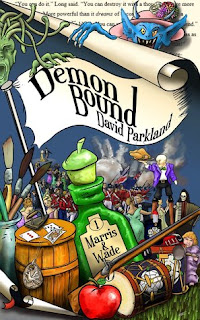 I was lucky enough to receive an e-book copy of Demon Bound direct from the author David Parkland in exchange for an honest review.

The story follows Marris and Wade, two men trying to make their way in the world after returning from the war. They start off innocently enough as carters, moving good backwards and forwards until a huge fire at the warehouse of one of their employers. They then set off to make their fortune any way that they can and that's when things start to go wrong...and weird for them. We also follow Orville Long, a demon hunter who is going about his business before being drawn into the main story.

The characters and world are both wonderfully written and are very reminiscent of Terry Pratchett and his Discworld series. There is a serious story line with plenty of humour thrown in to keep it light. I actually can't say enough about the writing, I genuinely enjoyed the way this book was written and the language used was wonderful.

I am going to have to be very careful about talking about the story as I definitely do not want to spoil anything for anyone as watching everything unravel as you read it yourself is so rewarding and extremely surprising. I will say that it is incredibly clever and will shock you with its genius as you find out more and more.

I can however discuss the characters and I think my absolute favourite character for most of the book was Orville Long, his story is so interesting and he comes across as such a badass, I absolutely love the opening scene. Also I can't mention Orville without mentioning Skiffarg either, their relationship is just brilliant. As we learn more about Marris though, he became a firm favourite as he becomes more and more interesting as things unfold in the story, The only character who I wasn't overly keen on was Wade, there is nothing wrong with him as he is well developed and he certainly has the gift of the gab, he is just not my kind of character, though he works well against the seriousness and sensibility of Marris.

I do also want to mention the cover, this definitely drew me to it and I've discovered since that the author actually painted it himself which is just awesome!

Overall I absolutely loved Demon Bound and I already can't wait for the next book in the series as I really need to find out what happens next.