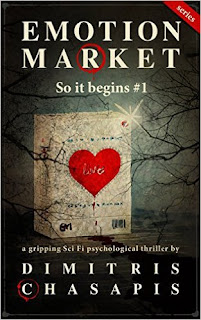 I received an e-book copy of Emotion Market direct from the author Dimitris Chasapis in exchange for an honest review.

The story follows multiple characters, but in main you follow Dr Caroline Emerson who is the creator of the Emotion Market, an invasive procedure in which you can have your emotions turned up or down depending on your needs and wants.

The story is extremely interesting and raises a lot of valid questions about the moral implications of using this kind of technology, It is a well thought out technology which probably isn't too far off what we might be able to achieve in the future.

I've found it very hard to review this book as though I think the premise is excellent and intriguing, I think the execution didn't fit. There are a lot of changes of perspectives, which I normally don't mind at all, but at times I was confused as to which character I was supposed to be following. I also thought there was a lot of information dumping, which may be because this is a sci-fi and I don't read much of it, so it may just be the way things are done differently, but for me I started to zone out at certain points, especially during some of the long speeches.

I would also like to mention that though, yes I agree this is sci-fi, I do not think it is a psychological thriller. Though there are secrets and lies, there isn't really anything too intense or anything too far from what you'd expect people to be doing when a new kind of technology comes out anyway. The big happening in the book doesn't actually happen until you're 95% through the book, so it comes and goes so quickly, there's not much of a pay off for the reader.

Even though I personally had problems with the book, I still enjoyed it and again I'll say the idea is amazing and incredibly interesting, so I'd recommend people to give it a try and make their own decision.