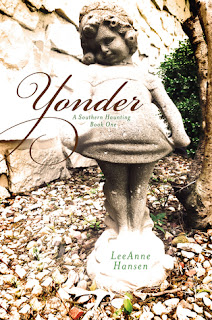 Back in November 2015 I was lucky enough to read Yonder: A Southern Haunting, Book One by LeeAnne Hansen and I absolutely fell in love with LeeAnne's writing and the story of Isabel (if you want to check out my review, it's over here). I've been patiently *ahem* waiting for book two since, so when LeeAnne contacted me to see if I would like to try out the audio version of Yonder, I jumped at the chance.

This was my first experience with an audio book so I wasn't sure what to expect. I've been putting off using audio books for a long time now as I wasn't sure if I'd pay enough attention if I was only listening rather than reading as it's very easy to tune out of things if you're busy doing something else.

With having read Yonder before and knowing how much I loved it, I knew that I would be paying attention, though once I started listening I don't know what I was ever worried about as I couldn't do anything else as I was enjoying listening to the story so much. LeeAnne narrates Yonder herself and in my opinion she does an amazing job. He voice fits the story perfectly and she doesn't quite put on different voices for each character but there is enough difference to know exactly who is speaking every time.

I felt like I was "reading" Yonder again for the first time, it was like discovering it all over again and I loved it. Having someone else read it to me meant being able to just get totally lost in the story and concentrate on the conversations between characters.

I cannot recommend this book and audio book enough to you!

As LeeAnne is such a lovely person, she agreed to take some time out to answer some questions for me and I'm extremely grateful. Here's my q&a with her:

Did you always know that you wanted to be a writer?

Your books combine romance and hauntings, what drew you to this combination? Have you always been a fan of the two?

I love romance (complete sucker for love stories) and I am a super fan of things like the Twilight Zone and history. I like stories where people are just trying to lead their lives and something they didn't expect pops up. I wanted a kind-of- Hitchcock feel – He loves to throw a normal Joe into a life he had no idea was possible or even existed.

Yonder, the audio book is narrated by yourself (beautifully I may add), can you tell me anything about the process?

First off, Thank you! That was quite a undertaking. I had never done anything like that before in my life! Luckily, I married my own Hollywood sound profession who bought me a mic for my birthday and helped set me up. I went to school for musical theatre and acting but I never thought of doing something like this, but the idea that someone besides myself would read Isabel had me ready to kill, so I knew I had to do it. It was a huge discovery into myself- I recently had half my thyroid removed due a growth (nothing serious) and it had taken awhile for my voice to make a come back- if anything, this project taught me that I really hadn't lost anything: It gave me the confidence I had been lacking. I really owe it a lot.

Now that Yonder is an audio book, will Ghost Light and your future books come out in audio book form too?

You had to ask. LOL- I need to learn a Scottish accent first. I am working on it. It's tough! But I hope to do all of what I write.

Do you have a writing routine or a favourite place to write?

Not so much a place but an atmosphere. I love to write when it is raining so I moved to the wrong place since living in Southern California, rainy days are rare.

I would have to say Sean Berenger in Ghost Light. He is such a wonderful ass! In reality, I based him on a drunken Scottish version of Han Solo. Who doesn't love Han Solo?

The feedback! Having people love my characters as much as I do is just the best part!

When you're not writing, what do you like to get up to?

I like to read and go to plays. Love live music concerts. I'm a huge fan of YouTube and watching Gifs with Sound, they make me smile.

I adore Christopher Moore, Ray Bradbury and Eve Silver - Moore is hilarious and strikes that human chord, Bradbury paints complex worlds with very few words and Silver makes me think I will never write Romance as good as her.

I know you're currently writing A Southern Haunting #2, do you have a rough idea of when we can expect it to be released?

In a few months. Currently, I have been hired out to write a couple of spooky screenplays for a production company and record some audio books for Warren Adler (author of War of the Roses. First audio book is already out called American Sextet- I did it under the name Lillian Yves.) As soon as these projects are completed (soon!) I'll return to spending all my focus on the sequel.

Thank you again to LeeAnne so much, both for giving me the opportunity to try out the audio book of Yonder, but also for answering all my questions, it's been an absolute pleasure.