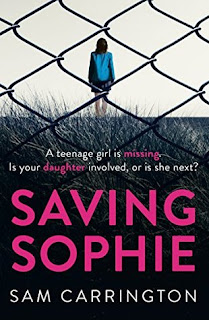 Today is Life Of A Nerdish Mum's spot on the paperback release blog tour for Saving Sophie by Sam Carrington. (Released on the 15th of December by Avon Books UK). I'm really excited to be bringing my review as well as a really interesting  guest post from the author on which comes first, the plot or the characters?

A teenage girl is missing. Is your daughter involved, or is she next?Your daughter is in danger. But can you trust her?When Karen Finch’s seventeen-year-old daughter Sophie arrives home after a night out, drunk and accompanied by police officers, no one is smiling the morning after. But Sophie remembers nothing about how she got into such a state.Twelve hours later, Sophie’s friend Amy has still not returned home. Then the body of a young woman is found.Karen is sure that Sophie knows more than she is letting on. But Karen has her own demons to fight. She struggles to go beyond her own door without a panic attack.As she becomes convinced that Sophie is not only involved but also in danger, Karen must confront her own anxieties to stop whoever killed one young girl moving on to another – Sophie.

A taut psychological thriller, perfect for fans of The Girl on the Train and I Let You Go.

Omgoodness! This book is just so good. If I could have I would have read it all in one sitting as when I had to put it down due to having to be an adult I was driving myself mad thinking about what was going on and what would happen next when I could pick it back up again.

Karen was an extremely interesting character, I don't think I've ever read a book that deals with agoraphobia. I thought it was covered really well and every time Karen considered leaving the house I could feel the anxiety and panic myself as she tried to conquer her fear. It also gave an interesting dynamic in the sense of relationships between Karen and her family and her best friend who really needs her but it isn't that easy. It was hard as a reader as I was frustrated that Karen couldn't just pull herself together for the sake of someone so important to her, but on the other hand I could see how much even the thought of leaving the house affected her. Though the book is called Saving Sophie I really feel this book is about Karen.

Sophie was a really well written teenager, I felt she read exactly how I'd imagine a teenager would talk and think (I was one once but I don't really remember). She made some questionable decisions throughout the story and didn't seem to realise the implications of some of them, but she is still in the age range where she'd want to avoid getting in trouble with her mum and dad, never mind the police.

The story is really well written and there are twists and turns throughout and I was kept guessing for a long time. My only "complaint" is that I wanted to know more! I wanted to hear what happened to several different people and I didn't get that, but that also leaves it open to make my own opinion about how people dealt with everything that had happened throughout the story.

Overall a really exciting read and one that I have been recommending and will continue to do so!

What comes first – plot or the characters?
By Sam Carrington

Both plot and characters are obviously essential for a novel, but which comes first in the writing process?
I have read various posts and articles where writers discuss what comes first for them. The majority seem to have their character first – a main character that has been slowly forming in their heads for however long before they decide to put pen to paper, fingertips to keyboard. You can’t have a plot without characters of course, however, I did have the idea for the plot first with SAVING SOPHIE.
From a personal incident, one which was highly emotive at the time, lots of ‘what if?’ questions arose. It’s these questions that formed the basic plot. Only then did I begin to build my main characters, thinking about who I wanted to put through this traumatic journey.
What surprised me when I’d got about halfway through writing the novel was that the characters had begun altering the planned plot! I’d read interviews with authors who said their characters ‘took over’ and I hadn’t understood how that could happen. After all – they are the writers, what lands on the page comes from their imaginations. I’d be a bit worried if the characters in my head began controlling things! But actually, they kind of do. I found that I’d get to the end of a chapter and the plot had taken an unexpected turn – one that was character-led. Things happened in the story that I didn’t even know I was thinking about. It’s a weird phenomenon, but one that is hugely satisfying.
Although the plot came first with SAVING SOPHIE, my next novel came about the other way around. My main character for book two had been wandering around in my head for a few weeks, and I then built her character and back story before throwing her into a situation. I also wrote the prologue first, without any thought to the ongoing plot. In the prologue, I have two characters who are witnessing a terrible scene and I knew that this was in the past – but I had no idea where I was going to take it from there. The plot was second to the characters this time.
I enjoyed both ways of coming up with my stories and it’s really fascinating how I feel I’m growing as an author by experimenting with different approaches. Now, book three is already forming in my head – am I starting with the plot or the characters this time? 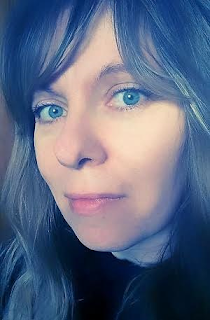 Sam Carrington lives in Devon with her husband and three children. She worked for the NHS for fifteen years, during which time she qualified as a nurse. Following the completion of a Psychology degree she worked for the prison service as an Offending Behaviour Programme Facilitator. Her experiences within this field inspired her writing. She left the service to spend time with her family and to follow her dream of being a novelist. Before beginning her first novel, Sam wrote a number of short stories, several of which were published in popular women’s magazines. Other short stories were included in two charity anthologies. Sam moved quickly on to novel writing and completed her first project within six months. Although this novel attracted attention from agents, it was her next that opened up opportunities. She entered this novel, with the working title Portrayal, into the Crime Writers’ Association Debut Dagger Award in 2015 and was delighted when it was long-listed. Being placed in such a prestigious competition was instrumental in her success securing a literary agent. When completed, this novel became SAVING SOPHIE, a psychological thriller which was published by Maze, Harper Collins as an ebook in August. The paperback and audio editions are publishing on 15th December.

Today on Life Of A Nerdish Mum I'm so happy to be back in the warm embrace of an Orenda Books and Random Things book tour!  I am kicki...