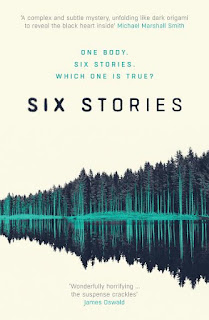 I've been waiting patiently and finally the day has come when I can share my review of Six Stories by Matt Wesolowski! Today marks the turn of Life Of A Nerdish Mum on the blog tour for this amazing book.

The novel is constructed as a series of podcasts, in which an investigative journalist describes the circumstances around the death of a teenaged boy in an outward-bound centre, interviewing witnesses, suspects and people close to the incident. Their six accounts form the six stories of the title, creating a "chilling and compelling, page-turning thriller that also delves deep into notions of truth, perception and loyalty"

Another amazing 5 star read from Orenda Books. I swear Karen has a golden touch when picking out books to publish!

Six Stories is an absolute breath of fresh air in the crime genre with an incredibly modern and unique way of presenting a story. The story is told in the form of pod casts that cover six interviews with people involved with the murder of a teenager twenty years previously.

The writing is beautiful and easily draws you in, making you feel like you are listening to the pod casts as they are being broadcast - in fact this is the first book that I've ever wished I could listen to in audio because I think it would be perfect. The interviews are personal and are at times uncomfortable both from the person being interviewed and the reader. The way the story unfolds from different perspectives is so smoothly done and I was kept fully immersed the entire time I was reading.

Matt Wesolowski has really captured the complex relationships of teenagers as well as their thoughts and feelings. Each character, both likeable and un-likeable are all extremely well fleshed out and believable. Scott King I found fascinating and his narration throughout the book really added to the atmosphere instead of disturbing it, he also added important information without feeling like it was being tagged on or info-dumped. It was skillfully done and I really enjoyed the whole experience.

Scarclaw Fell, the site of the murder is a character completely in it's own right with its overpowering presence and beauty, Matt Wesolowski describes Scarclaw Fell in such a way that you can picture yourself within it and feel it around you as you are reading with the trees looming over you.

Overall an excellent read and one I think everyone needs to go out and try as it's something so new and exciting, but with a theme that's recognisable and comfortable. 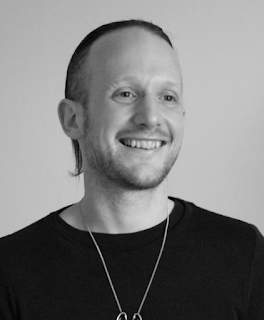 Matt Wesolowski is an author from Newcastle-Upon-Tyne in the UK. He is an English tutor and leads Cuckoo Young Writers creative writing workshops for young people in association with New Writing North. Wesolowski started his writing career in horror and his short horror fiction has been published in numerous magazines and US anthologies.Wesolowski's debut novella ‘The Black Land‘ a horror set on the Northumberland coast, was published in 2013 by Blood Bound Books and his latest horror novella set in the forests of Sweden is available in 'Dimension 6' magazine through Coeur De Lion Publishing.Wesolowski was a winner of the Pitch Perfect competition at 'Bloody Scotland'; Crime Writing Festival 2015, his subsequent debut crime novel 'Six Stories' will be available through Orenda Books in the spring of 2017 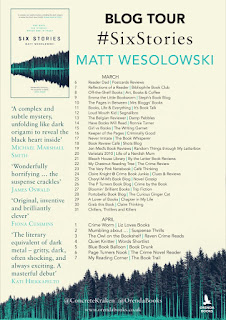