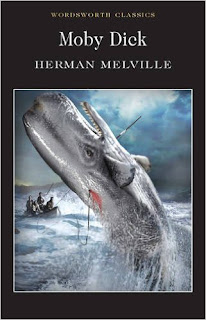 I'm writing my reviews for my buddy reads all completely out of order so this one is actually from this year and we finished it not very long ago (7th of April to be exact)! It was my turn to choose and I thought we hadn't done a long read in a while so why not get a "biggie" read now and so I chose Moby Dick by Herman Melville. It was not quite as long as I expected and I am eternally grateful that it wasn't. I did also get us The Turn Of The Screw to read in between as a break when we needed it (which I'll review soon) and it was a good job I did.

'Call me Ishmael.' So begins Herman Melville's masterpiece, one of the greatest works of imagination in literary history. As Ishmael is drawn into Captain Ahab's obsessive quest to slay the white whale Moby-Dick, he finds himself engaged in a metaphysical struggle between good and evil. More than just a novel of adventure, more than an paean to whaling lore and legend, Moby-Dick is a haunting social commentary, populated by some of the most enduring characters in literature; the crew of the Pequod, from stern, Quaker First Mate Starbuck, to the tattooed Polynesian harpooner Queequeg, are a vision of the world in microcosm, the pinnacle of Melville's lifelong meditation on America. Written with wonderfully redemptive humour, Moby-Dick is a profound, poetic inquiry into character, faith, and the nature of perception.

When I started Moby Dick, I was wondering why people said they struggled so much with it, I was really enjoying it and the pages were flying by...how wrong was I! This book tricks you into thinking that it will be good. The first 100 pages are really good, Ishmael is witty and engaging and his relationship with Quequeg was wonderfully endearing.

There was a lot more religion than I expected, but it was of a time where religion was pretty much the most important thing around.Though it isn't always dealt with as reverently as you'd expect, Ishmael mentions orchard thieves which took me a minute to realise he meant Adam and Eve and then I full on laughed out loud.

From the minute Ishmael and Quequeg step on the Pequod the whole book starts going down hill. I was thoroughly looking forward to meeting the infamous Captain Ahab and I expected him to be such a badass...but no sadly I was wrong. He was basically non present for most of the journey and when he was present he was not a particularly strong or stand out character.

I wanted a fast paced revenge story of one man and a whale, but what I got was an encyclopedic look into whaling in the 19th century. Don't get me wrong, the details were fascinating, but if I'd wanted to learn that kind of information I wouldn't have  read a novel, I would have done some research. When the story was being told, the writing was wonderful, but I just didn't like the dry facts throughout.

The ending to me really disappointed too, it felt rushed and half a$$ed. I won't spoil it in case there are people who haven't read it who still want to. It wasn't spoiled for me so I won't spoil it for other people. I will say however is was very unsatisfying.

It was a hard slog but I'm glad we did it, it's another one off our wish lists.

I gave this book 2 stars. 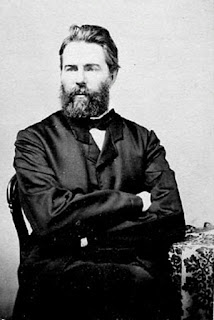 Herman Melville was an American novelist, short story writer, essayist, and poet. His first two books gained much attention, though they were not bestsellers, and his popularity declined precipitously only a few years later. By the time of his death he had been almost completely forgotten, but his longest novel, Moby-Dick — largely considered a failure during his lifetime, and most responsible for Melville's fall from favour with the reading public — was rediscovered in the 20th century as one of the chief literary masterpieces of both American and world literature.