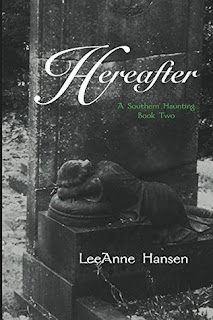 I am really excited to be revealing my review for Hereafter (A Southern Haunting Book 2) by LeeAnne Hansen today as I read it a few weeks ago and I have been busting to talk about it, but I couldn't share until after it had been released.

Forced to live and run a business with a woman who shattered his heart years ago, and without his father's help, Charles' life is far from ideal. Renown as a ladies' man, Charles now finds himself coming up short on women, charm and even dead bodies for his mortuary. He knows who is to blame for all this, even if he hasn't the slightest idea why she is causing him so much torment ...
Samantha has been given a second chance even though she knows that she does not deserve one. Now haunted by her past, she fled from a life she was desperate to escape, only to collide with the man who once held her heart but now wishes nothing but to crush it. Has she just run from a smouldering fire to an even deadlier one?
As the night grows darker and storms brew on the horizon, both Charles and Samantha realise that the past is not an easy ghost to shake and the future is rarely predictable.

When ever I review one of LeeAnne's novels, I always end up gushing because I just love them so much (See my reviews of Yonder and Ghost Light). I don't know how to put into words just how much I enjoy her books and that means that I end up waffling so apologies in advance for this one!

Hereafter follows the same time line as Yonder and starts by going through each of Isabelle's birthdays, except they are from the point of view of Samantha and Charles instead. Having read Yonder and already knowing each scene, it was incredibly interesting to see the exact same thing from a different perspective and it shows just how much things can be missed or misunderstood when you only know one side of a story.

When the story kicks into the present day (1940's) it then follows Charles and Samantha as they struggle with the situation they have been forced into. As I learnt more about both of them I came to love them the same way I did with Isabel and Benjamin in Yonder. I honestly never thought I would change my opinion of Charles, I thought he was pompous and a bit of an ass, but I did change my mind after getting to know him better. Another lesson learnt there, that you shouldn't judge someone until you get to know them.

They are some really beautiful moments throughout the book, some quieter moments which are so important but that can be over looked. The talks that Charles and Samantha have over the years about the stars and Peter Pan are just so sweet. Samantha also has some moments with a girl called Wendy and they were so touching and poignant, that they have stayed with me log after I finished the book.

The haunting in Hereafter is a lot more subtle than in Yonder, and I liked how it was incorporated into the story. I enjoyed the subtlety and I thought it worked very well with being a "lighter" haunting as there is a bit more darkness in the main story line.

Overall an absolutely excellent story and another love for me, I can already tell you a spoiler for my twelve days of Christmas, that this book will be on my list of the twelve top books of the year. I am also incredibly excited for the next instalment of A Southern Haunting and finding out what happened between Eve and Doug.

I gave Hereafter ALL THE STARS! 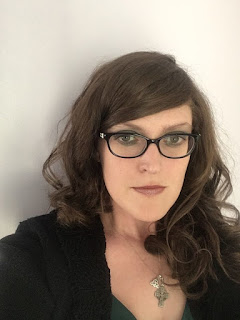 If you'd like to know more about LeeAnne, I interviewed her last year as part of my review for the audio book release of Yonder, you check that out here.

LeeAnne Hansen was born in Paris, grew up in Oklahoma and now lives in sunny southern California with her husband and cats. She enjoys writing, acting and playing bass guitar. She can be seen gracing the stage in various theatres or even directing. She is a graduate of the American Musical and Dramatic Academy in New York City and has studied art and astronomy. She also thoroughly enjoys long walks on the beach.