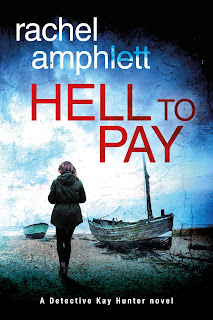 Who isn't excited about the next instalment of the Detective Kay Hunter series, Hell To Pay, by Rachel Amphlett? When I heard there was going to be a blog tour, I immediately jumped at the chance to be able to read, review and be a part! As you'll be able to tell from my review, I'm so glad I did.

When a road traffic accident on a dark autumn night uncovers a disturbing conspiracy, Detective Sergeant Kay Hunter’s investigation exposes a ruthless serial killer exploiting vulnerable young women.With her enemies unmasked and her career spiralling out of control, Kay’s determination to seek vengeance for the victims brings her dangerously close to those who want to silence her.Undeterred, she uncovers the real reason behind a plot to destroy her career and sets in motion a terrifying chain of events.Could Kay’s need for revenge be her undoing, or will she survive to see justice served?

Detective Kay Hunter is officially in my top detectives of all time. She's strong, intelligent, determined and I think a great role model. She does her job properly and even when things get personal, she stays professional to make sure the job gets done.

Hell To Pay is the fourth instalment in the series, but though it is fully recommended to read the three previous books because of how good they are, this can be read as a stand alone as there is plenty of character development throughout. There are some spoilers for previous books though if you are planning on reading them all.

I was completely sucked into this story and became increasingly invested in the outcome. When real life came knocking and I had to put the book down, I was constantly wondering what would happen next and how things would be resolved. There's a lot of tension and at times, you're nervously waiting to see if something would go wrong.

I've grown to love detectives portrayed with a happy home life, instead of the tried and tested cranky, alcoholic loners (loveable though they may be) and I love the balance we are given, seeing Kay's home life with Adam and the simple joy she gets out of babysitting for some Guinea Pigs. I like how they are both so supportive of each other and their respective careers. It comes across as a very healthy relationship.

Hell To Pay is incredibly well written and I thoroughly enjoyed my read, in fact I am already eagerly awaiting the next book in the series, just to see where it goes from here and what decisions Kay will make following everything that has happened to her. 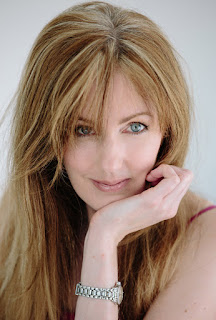 Rachel Amphlett is the bestselling author of the Dan Taylor espionage novels and the new Detective Kay Hunter series, as well as a number of standalone crime thrillers.

Originally from the UK and currently based in Brisbane, Australia, Rachel’s novels appeal to a worldwide audience, and have been compared to Robert Ludlum, Lee Child and Michael Crichton.

She is a member of International Thriller Writers and the Crime Writers Association, with the Italian foreign rights for her debut novel, White Gold, being sold to Fanucci Editore's TIMECrime imprint in 2014, and the first four books in the Dan Taylor espionage series contracted to Germany’s Luzifer Verlag in 2017. 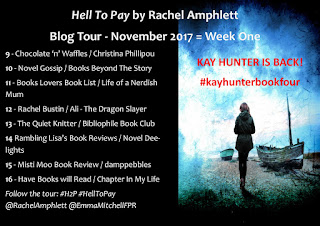 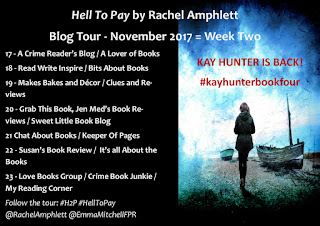