Shadow Of The Beast by Michael Fowler - Blog Tour 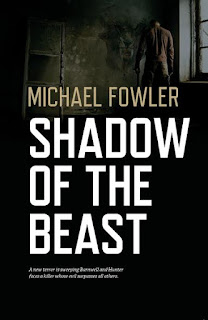 Today is my stop on the Shadow Of The Beast by Michael Fowler blog tour and I'm excited to bring you my 5* review!

Shadow Of The Beast synopsis

A DS Hunter Kerr Novel‘A new terror is sweeping Barnwell and Hunter faces a killer whose evil surpasses all others.’The discovery of a skeleton buried beneath the altar of an old chapel should not have raised an eyebrow, but this one was different. This one had been savagely murdered, and all the evidence points to the blood-thirsty killer the press have dubbed ‘The Beast of Barnwell’; a killer who has already served time for the brutal murder of a young girl and is now free.Is this his handiwork?In the midst of the enquiry, a 22 year old woman is abducted on her way home from work. Is there a link?To add to Hunter’s workload his former boss, Michael Robshaw, is deliberately mown down and left for dead.Why?In his search for the truth Hunter returns to his undercover roots - with deadly consequences.

Let me start by saying that I absolutely loved this book! It was my first Michael Fowler book and I will be going out to read all his previous books too. Shadow of the Beast is the fifth outing of DS Hunter Kerr, but this can definitely be read as a stand alone or as your first taste of Michael Fowler's writing.

Shadow of the Beast is very well written and is fast paced and easy to read. There is enough police lingo to make it feel realistic and to submerse you in the story without losing a lay person with too much jargon. The police procedure side was also shown just enough to give an idea of what the police have to go through in an investigation without it slowing the pace of the book or lessening the excitement.

DS Hunter Kerr is an amazing lead man, he is hard when he needs to be but has a soft side which is shown in his relationships with his friends and family alike. It's nice to see another hardened police man with a happy marriage and children. I also think his relationship with his partner Beth is brilliant, there is no sexual tension, they are just two really good friends with a healthy dose of competition between them to be the best.

The main story follows a discovery of bones beneath a demolished church and moves quickly from there when other remains are found and then all seem to be linked to the "Beast Of Barnwell". It was interesting to see the investigation go from having no leads, to it picking up pace the further into it they got, it felt like a really natural progression. You're kept guessing at what's been going on and who it could be and I was actually surprised at the end.

Overall between the excellent story-line and the extremely likeable characters I really enjoyed this book and I flew through it. I will be (and have been) recommending this book to people! 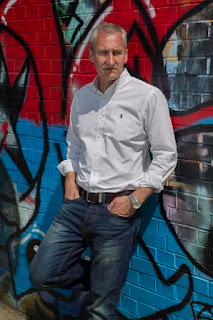 Michael Fowler was born and brought up in the Dearne Valley area of Yorkshire where he still lives with his wife.
At the age of 16 he left school with the ambition of going to art college but his parents’ financial circumstances meant he had to find work and so he joined the police.
He has never regretted that decision, serving as a police officer for thirty-two years, both in uniform and in plain clothes, working in CID, and undercover in Vice Squad and Drug Squad, retiring as an Inspector in charge of a busy CID in 2006.
Since leaving Michael has embarked on two careers: he is an established author with two crime series to his name: DS Hunter Kerr and DS Scarlett Macey, and he has also co-written a true crime story.
He is a member of the Crime Writers Association and International Thriller Writers.
Michael has also found considerable success as an artist, receiving numerous artistic accolades. Currently his work can be found in the galleries of Spencer Coleman Fine Arts at Lincoln and  Stamford.
Find out more at  www.mjfowler.co.uk
or follow him on Twitter @MichaelFowler1
Pre Order Shadow Of The Beast HERE

And don't forget to check out the rest of the blog tour! 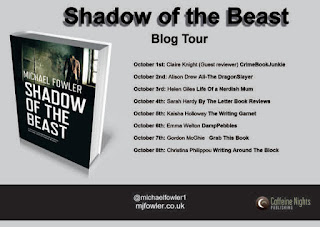