They Move Below by Karl Drinkwater - Review And Super Exciting Announcement 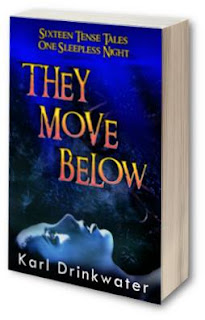 Being Halloween I wanted to read and review something a little (or a lot) creepy. I decided on They Move Below by Karl Drinkwater. They Move Below is a collection of 16 short stories and contains some of the creepiest tales I've read in a long time. Before I get into my review though I want to share something EXTREMELY exciting! Earlier in the year I reviewed Harvest Festival, one of the stories in this collection and I absolutely loved it. As an amazing treat Karl Drinkwater has turned the first half of this story into an online interactive experience (think read your own story books, but online)! I cannot tell you how much fun it is reading through the story and making decisions for the characters, I get so involved each time I play/read through. This experience is now available for everyone to go and check out so I advise you to go do it and please let Karl Drinkwater (and me) know what you think!

Ok so if anyone is still around (I don't blame anyone who isn't because I'd be over there reading through right now myself) I'll share my review of the 16 stories contained in They Move Below.

The first story is Transmissions Part 1 and it is a kind of introduction to the book with a narrator contemplating darkness, the man is very philosophical and really makes you think, even when you have an idea of what he's actually about to do.

If That Looking Glass Gets Broken, starts off innocuous enough and then then further into the story you get, the more messed up things become. By the end I wasn't 100% sure if I was dealing with a woman with mental issues or something a lot more sinister which made the reading very unsettling.

The title story, They Move Below, is set on a small boat on the ocean containing just two people. I did struggle with the dialect at first but I soon fell into the rhythm of it. This story definitely shows how important it is not to mess with things that you don't understand and that a fear of the deep is a sensible one to have.

I've always thought that museums can be creepy places and I couldn't put into words how creepy they may be at night...Karl Drinkwater however has done just that in Creeping Jesus! As a parent this also terrified me as the thought of school trips gets closer as my Nerdling gets older.

I don't want to say much about Harvest Festival as you have the opportunity to experience the first half of it above, but if you do want to know more, my review of that is here and it also has a Q&A with Karl.

"Holyyyyyy Crap" - these are the exact notes I write about Just Telling Stories. This story was absolutely terrifying and I think pretty much everyone's worst nightmare (or definitely mine at least). I struggled going to the bathroom in the night after reading this for a good while and probably will again now I've thought about it to review it! It really has stuck with me. There are also some really nice nods to Dean Koontz and other popular horror tales.

In Claws Truth Forebear the main character really learns a hard lesson about not taking things that aren't yours, I don't want to spoil what the feeling you get through this story is, but I will say that I felt it extremely intensely and it was a very difficult read to get through as I felt like I was suffering with the main character. A really excellently written story.

Breaking The Ice was extremely tense and I was never really sure what happened. I think that really adds to the horror of something, when you can only guess and your imagination does the work for you, usually with terrifying results.

I really liked how How It Got There was written and I liked the idea that the threat doesn't always come from where you would expect. Very clever!

Web is another story along a similar vein as If That Looking Glass Gets Broken in that you aren't sure if what is happening is the result of hallucinations from too much Nutmeg or if it is the slow mental breakdown of a woman who has suffered so, so much. Either way a painful read and you really feel for the main character and just want it to be ok for her.

With the story, Scissor Man, Karl Drinkwater has created a classic urban legend that could easily rival the bogey man as the Scissor Man seems even more horrifying to me personally. It also leaves you questioning what really happens right at the end.

I absolutely loved Sinker! This story was so incredibly well thought out and I don't think I've ever read anything like this before. What happens comes so out of the blue and was nothing like what I was expecting with a hunter becoming the hunted story. Though only a short story, I could picture the village clearly as well as the main character and I felt like I was right there with him.

With technology and the access everyone has to information all the time, it is a lot harder to scare the current generation, but in Overload, this technology and access is used as the horror. Overload is written in a very interesting way and reading it as if you were the main character really helps with the immersion.

Regression was really interesting and looks at whether childhood fears can be a reality and what would happen if they came true when you were an adult and had managed to avoid them for a long time.

I really like stories written in interview format and Second Transcript really works well being written this way. I like the way it makes it feel like you are there as it is happening and are listening to the conversation backwards and forwards between the policeman and the witness. This story also adds more information to the How It Got There story and makes you question just how big this thing really is.

In Living In The Present we have another story where the threat does not come from where you expect it and when it does come, it definitely does not come in any kind of form that would even cross your mind. There was definitely very strange Father Christmas imagery used in this story which made it extra creepy.

In Bleeding Sunset, Dancing Snowflakes, the tension builds up slowly and then is released with an unexpected bout of childish glee and playfulness before the horror then kind of hits you in the face. Were vampires the cause of what happens or did the teacher do it all herself? Either way a really well written story.

The final story is Transmission Part 2 and it is the one that goes big before you go home. To me the scary thing about this story is the smallest possibility that it could actually happen. No one knows what's out there in the vastness of space and no one really knows the repercussions of everything that we do here on Earth and how it can affect other things or beings.

Overall an absolutely excellent collection and one I would definitely recommend to lovers of horror. There is also extra bits at the back where Karl Drinkwater talks about the inspiration behind each story and I thought that was incredibly interesting and actually answered some of my ponderings from while I was reading the stories.

Other good news is that just in time for Halloween, Harvest Festival is also available as an audiobook! Click HERE for the links.
Posted by NerdishMum at 08:00