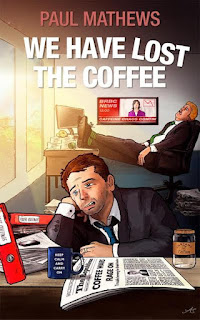 Today on Life Of A Nerdish Mum I am happy to be part of the blog tour for We Have Lost The Coffee by Paul Mathews. I have an exciting extract as well as my own review of the book.

We Have Lost The Coffee

London, 2045. Three months into the Coffee Wars and Britain’s caffeine supplies are at critical levels. Brits are drinking even more tea than usual, keeping a stiff upper lip and praying for an end to it all. A secret Government coffee stockpile could save the day...but then mysteriously disappears overnight.One man is asked to unravel the missing-coffee mystery. His name is Pond. Howie Pond. And he’s in desperate need of a triple espresso. Meanwhile, his journalist wife, Britt, is hunting royal fugitive Emma Windsor on the streets of the capital.Can Howie save the British Republic from caffeine-starved chaos? Will the runaway royal be found? And just what will desperate coffee drinkers do for their next caffeine fix? Find out, in Paul Mathews’ latest comedy-thriller set in the Britain of the future...

We Have Lost The Coffee is the third book in the "We Have Lost" series by Paul Mathews. Though you don't have to have read the previous two books to have read this, its always good to have back ground information and character development. And well, they're good books!

Howie Pond is a brilliant character, I love his obsession with being a secret agent and I found myself reading his voice in the style of Sean Connery. "His name is Pond, Howie Pond". His wit and charm definitely won me over and I laughed out loud at more than one point throughout the book.

I feel the characters are all really strong and I really liked Howie's wife, Britt. She's a strong and independent woman. Britt and Howie work really well together and I think of them as a dynamic duo.

The mix of mystery and comedy go together well. I only discovered this genre last year and I'm really glad that I did as I enjoy laughing along with the characters while trying to solve mysteries, Paul Mathews has taken a well loved genre and has added a layer of fun and lightness to it that complements it and is thoroughly entertaining.

Being set in 2045 means that the story is far enough in the future to play around with things, like having a coffee war, but everything else is recognisable. It gives the author more freedom with how things work without it being out of the ordinary for the reader.

As to the story, with it being a mystery I don't want to say too much as I don't want to spoil what happens, but it is extremely well written and planned out and I enjoyed both story lines of the missing coffee and the missing royal, there was enough going on without it being over whelming.

A really enjoyable and funny read and one I'd recommend, especially if you love crime or mystery books but are in the mood for something a little lighter for a change.

Overall a great book and I gave it 4 stars. Paul Mathews is a 40-something British guy who's given up his 9-to-5 job in London to become a full-time comedy novelist. Why did he make this bold step? Well, he'd had enough of crazy managers and uncooperative printers. So one afternoon, after nearly 20 years working at the heart of the British Government, he shut down his computer, deleted all his emails and escaped the office - never to return. (Okay, it wasn't quite as dramatic as that, but he is a fiction writer, so please cut him a little slack.)His two decades working as a Government press officer gave him an invaluable insight into all the key elements of modern government: bureaucracy, bungling, buffoonery, buck-passing and other things that don't begin with the letter 'b' - such as politicians with huge egos and very little talent. He's now putting that knowledge to use by writing about a British Government of the future - where, believe it or not, the politicians are even bigger idiots than the current lot.Before becoming a PR guy, he was an accountant. But he doesn't like to talk about that. And going back further, he went to Cambridge University and studied philosophy. Despite thousands of hours of thoughtful contemplation, he still hasn't worked out how that happened. The highlight of his university years was receiving a £300 travel grant to visit Prague and 'study philosophy'. It was a trip which ignited his love of Eastern Europe where he spends a lot of time writing and drinking black beer.Other interests include wearing sunglasses and having his photograph taken. Visit his website for more info on this (allegedly) humorous man: www.iamthe.website

To Pick Up Your Own Copy 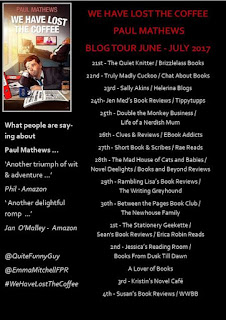