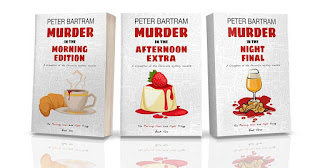 A while ago I was on a blog tour for Stop Press Murder, a Crampton of The Chronicle mystery by Peter Bartram and I absolutely loved it (you can check out my review here). So when Peter contacted me to say that he was releasing a whole trilogy of novellas as part of the Crampton series I was extremely excited.

I will be bringing my review to the blog soon as I finished all three novellas, but today I have something super exciting to share, an extract from Murder in the Morning Edition.

And that's it! How great is that, thank you so much to Peter for providing me with the extract today. 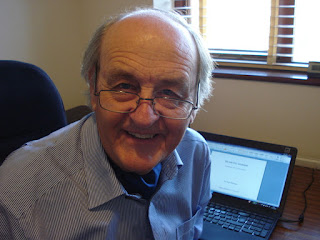 Peter Bartram brings years of experience as a journalist to his Crampton of the Chronicle crime mystery series. His novels are fast-paced and humorous - the action is matched by the laughs. The books feature a host of colourful characters as befits stories set in Brighton, one of Britain's most trend-setting towns.You can download Murder in Capital Letters, a free book in the series, for your Kindle or other e-reader from www.colincrampton.com.Peter began his career as a reporter on a local weekly newspaper before editing newspapers and magazines in London, England and, finally, becoming freelance. He has done most things in journalism from door-stepping for quotes to writing serious editorials. He’s pursued stories in locations as diverse as 700-feet down a coal mine and a courtier’s chambers at Buckingham Palace. Peter is a member of the Society of Authors and the Crime Writers' Association.