Race To The Kill by Helen Cadbury - Blog Tour Review 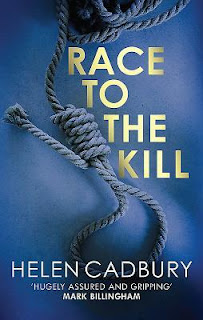 Today on Life Of  A Nerdish Mum I am absolutely honoured to be part of the blog tour for Race To Kill by Helen Cadbury. Helen sadly passed away in June 2017 and this is her final book. She was a fabulous author and by all accounts a wonderful person too.

Race To The Kill

It is the middle of a long night shift for PC Sean Denton and his partner PC Gavin Wentworth when they are approached by a dishevelled-looking woman desperate that they follow her. She leads them to the old Chasebridge High School where they find the dead body of a Syrian refugee. The investigation which points to the neighbouring greyhound stadium finds Denton caught up in a world of immigration, drugs and sexual abuse, and one in which his private life becomes increasingly entwined.

Race To The Kill gripped me right from the first page. I was instantly drawn in and I wanted to know what had happened. The writing in this book is absolutely fabulous, I've never visited Doncaster, but I really got a feel of the place and felt like I'd actually visited instead of just read about it.

I thought the characters were all excellent. Though this is the third book in the Sean Denton series, there is still character development and though previous cases are mentioned, this could easily be read as a stand alone novel. (Though obviously they are all excellent so you should really read all of them). Sean, the main character is really well balanced and is very human. I'm really fond of him and he's definitely someone I would get on with in real life. I loved the snippets of information that we get to know about Khan and Knowles and I think they're both really interesting characters.

The story is incredibly plotted out and for the first time in a long while, I had an AHA moment and actually commented out loud. It's really clever. I also enjoyed how there was more than one story going on, but not too much that would detract from the main action or enough so you could get confused.

I absolutely loved this book and I really didn't want to put it down and I didn't want it to end. I was sad several times throughout the book as I came across parts that I thought "OOh I can't wait to see how that pans out" and then realised that I'll never know as this is the last book. The book community has lost one of its greats. 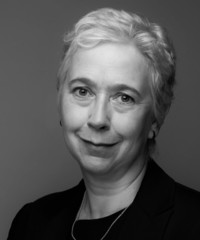 Helen Cadbury wrote fiction, poetry and plays. She worked as an actor before becoming a teacher. She divided her time between writing, teaching in a women’s prison and delivering training in youth arts. She had an MA in Writing from Sheffield Hallam University. Helen grew up in Birmingham and Oldham. After living in London for many years, she moved north and settled in York, where she lived with her family. Helen Passed away in June 2017. 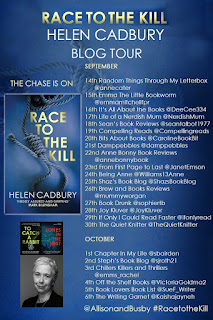