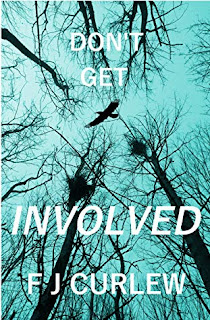 I was incredibly honoured when F J Curlew contacted me to see if I'd be interested in reading her new book. I have previously read and loved Dan Knew, so I immediately said yes. Thank you so much for having me as part of the blog tour.

A missing shipment of cocaine.Three street-kids fighting for their lives.A mafia hit-man intent on killing them.A naive expat who gets in their way.Who would you bet on?

Don't Get Involved is a huge step away from Dan Knew and F J Curlew proves that she's just as talented in this genre. The writing is really well done and the world building is brilliant. You can really tell that the author lived in the Ukraine as it all felt so authentic.

The story is told from more than one perspective over a period of time and the story unfolds slowly before coming to a fast paced ending. I enjoyed following the street children and "watching" as they survived in ways that wouldn't cross your mind if you'd never been in that situation.

I would normally say that books containing, mafia or gangs wouldn't be my cup of tea, but I'd say Don't Get Involved is more based on the people than the gangs etc and so I really enjoyed it.

Overall a really well written book and one I enjoyed. I gave this book 4 stars.

Fiona spent fifteen years working as an international school teacher, predominantly in Eastern Europe. Much of her inspiration comes from her travels. Her writing has been described as, “Human experience impacted upon by political situation, interwoven with a love of nature.”
She now lives on the East Coast of Scotland with Brockie the Springer, and Fingal the rescued Portuguese street-cat. Her days are divided between dog-walking in beautiful places and working on her stories. Not a bad life!
Don't Get Involved is her third book.