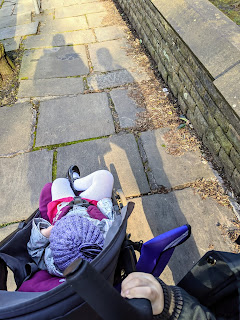 I'm not sure if anyone will be interested in this, but I'm doing it more for me as an outlet than anything else. I've decided to do a blog post a day ish, to just share what me and the Nerdlings have been up to and learning. You never know it might help others too.

Last night I chatted to mini Nerdling about how for now, me and his dad are going to be his teachers as well as his parents and that it's a weird situation for us all and there may be times that we all get angry or frustrated, but we all need to try our best. His only response was to say that it wasn't a weird situation, it was a different one so it's fine. I swear kids deal with things so much better than adults sometimes!

Today obviously is Saturday so I just wanted a nice chill day and that's what we've done for the most part. If mini Nerdling had his way though we'd have already completed the 10 days of work they've been sent from school plus more!

What we have done though, is get into the back yard and blow bubbles. 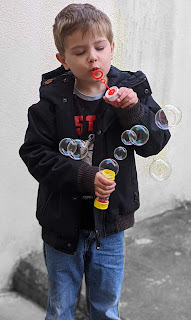 We've tested him on his spellings he got last week, he's done his kickboxing exercises and he's drawn and put up his lockdown rainbow in the front window. 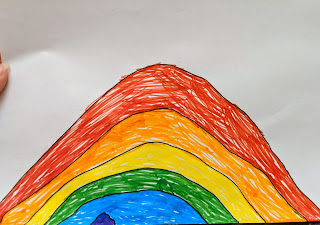 Before bed, I've also given mini Nerdling a journal so he can write a few words or draw something at the end of every day. I used to do this with the oldest when she was younger and she loved it. I'm also remaking the jar I had full of different questions that they can pull out if they want.

The Nerdlings have both just got on with normal stuff too, like building blocks, colouring, sword fighting and eating everything in sight. Baby Nerdling was up for four hours in the night last night as she's finally getting more teeth and they're all coming in at once, so she's grumpier than usual today. It's definitely going to be a challenge keeping everyone happy and content at all times, but with some good and hard team work, but we'll do it. 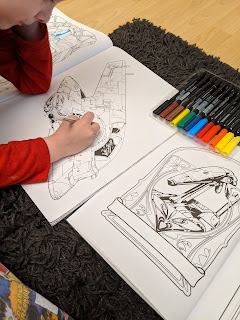 Some days I may miss, some days there may only be a few lines, but hopefully it'll help me and maybe even just one other person, keep on track. Feel free to comment or message about how you're doing, we're all in this together.
Posted by NerdishMum at 20:01