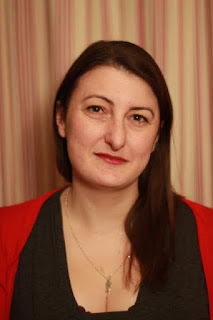 Today on Getting To Know... I am very lucky to have Tracey Sinclair, author of the Cassandra Bick Chronicles.

You're currently writing your Cassandra Bick Chronicles series and have most recently published the third instalment Angel Falls, will there be more books in the future?

Yes, definitely – I’m currently working on the next one.

The Cassandra Bick Chronicles are supernatural and contain vampires etc. Do you believe any such creatures exist or have existed in the past or do you believe they have developed from folklore and misunderstandings?

While part of me would like to believe in supernatural beings, I think it’s far more likely that they stem from folklore, superstition and a misunderstanding of certain phenomena that we’ve now explained through science – plus of course the fact that human beings have always loved fantastical stories.

If you could be a supernatural being, what would you choose to be?

I’d be a vampire as long as I didn’t have to kill anyone! I’m a vegetarian…!

You have previously written a collection of short stories, No Love Is This, as well as two collections of Dark Dates stories, do you have a preference over writing a novel or a short story?

I think they both have their strengths and their difficulties, and I like both – not every idea can be, or should be, stretched into a novel, and some of the most beautiful things I’ve ever read have been short stories. I also think they’re quite discrete skills – not all novelists can write good short stories, and vice versa. In the Dark Dates world, writing short stories gives me an opportunity to explore different viewpoints and characters outside the main narrative arc, which has turned out to be enormous fun.

If The Cassandra Bick Chronicles became a TV show, who would you like cast as Cassandra?

Ooh, people ask me that and I’m always stumped. I think Kat Dennings or Lizzie Kaplan would manage the snark, but I’m not sure they could do the British accent!

I love all my Dark Dates crew, honestly. They are so much fun to write.

When you're writing, do you have a set routine that you follow or a certain place to sit and write?

In terms of routine, for the longer pieces I start by doing short sketches of scenes to get a sense of character, and play with ideas. Then I do a first draft – and sometimes a second – in longhand (I get through a lot of notebooks!) and usually do a third or even fourth draft before I send it out to my beta readers and then do another couple of polishes before it is done. I don’t have certain writing places – anywhere is good. I am weirdly fussy about notebooks and pens, though.

Thank you so much to Tracey for taking the time to answer my questions!

To connect with Tracey Sinclair 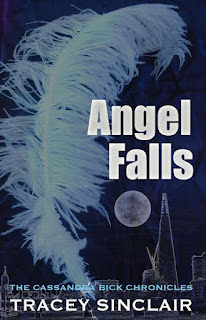 To pick up a copy of Angel Falls click here.