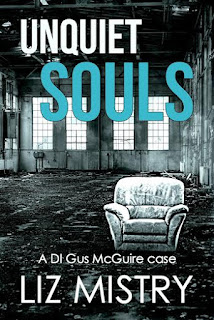 Today is my turn on the Unquiet Souls by Liz Mistry blog tour and I am very excited to be bringing you the third extract from Unquiet Souls, the first book in an exciting new series! To read the first extract Meet DI Gus McGuire check out Crime Thriller Girl's blog here and to read the second extract DI Gus McGuire Laid Bare check out From First Page To Last's blog here.

The Matchmaker inhaled deeply each time he pulled himself up: chin to the bar, toes pointed,
naked sweaty torso rigidly straight, the smell of his own perspiration creating an almost sexual
pleasure, spurring him on to complete each agonising repetition. Finally, he was done.
Dropping gracefully to the floor, he towelled his soaking body and, frowning at the silent phones
on his desk, walked through to the ensuite. A cursory two-minute shower, clean clothes and he
was back at his desk.


Leaning back in the soft leather chair he waited, his impatience betrayed only by the jig of
his right knee and his fingertip’s measured tap on the polished mahogany desk. It had taken
years, combined with the creation of his ‘Decompression Room’, to finesse this level of self-
control.


He pumped the number into a safe phone and waited. The idiot still wasn’t answering.
Deliberately, he replaced the phone on the desk. His fingers and knee continued their languid
dance, but his breathing was strained. Leaning over he pressed a button. Immediately, relaxing
music filled the room. Eyes closed, hands resting on his abdomen he allowed the calm to
embrace him until his anger receded.


Finally, pulling his chair closer to the desk, he looked at his computer. The order form was
on the screen. Granted the client had made a particularly difficult request but, he’d also paid
handsomely for their delivery agreement. Now, three days before the due date the acquisition
form remained unvalidated. The client was becoming nervous. So was he and, to make matters
worse, The Provider was uncontactable. Not acceptable… not acceptable at all. It was
beginning to look like the delivery would fail or, at the very least, be delayed. The resultant
financial loss would be catastrophic, to say nothing of the damage to their reputation.


The phone rang three times before he answered. “Speak.”
It wasn’t the voice he’d expected but, nonetheless, the call was important.
“Client 21 has returned damaged goods again.”
The Matchmaker frowned and pulled the relevant file up on his computer. “That’s becoming
an issue.” He listened. “You’re right. Client 21 is becoming careless and arrogant, putting us
all at risk. We’ll make him pay.”
The Facilitator laughed. “Yeah, hit him where it hurts most…in his pocket.”
The Matchmaker considered the Client’s file before responding. “I think a £100,000 damage
fee should teach him. No more supplies till he’s settled, ok?” Hanging up, he typed a note on the
file and glared at the silent phone.


How amazing does that sound! Unquiet Souls is published by Bloodhound Books. 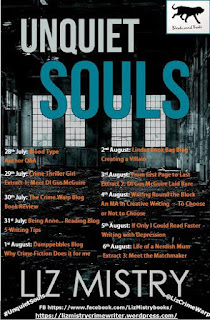