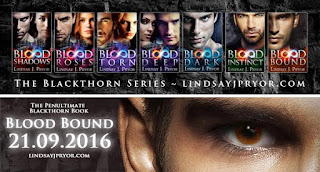 Today I am handing over Life Of A Nerdish Mum to Lindsay J. Pryor to give a shout out about her book series and her newest book, Blood Bound, which is out today!

Set against a dystopian urban backdrop, BLACKTHORN is a dark, complex and multi-layered Gothic paranormal romance series about eight individuals fighting to overthrow the oppressive human-led regime that has blighted their lives.

Primarily based around a polluted, over-populated, rotten core of a locale, Blackthorn is the district where the ‘third species’, such as vampires and lycans, are forced to live. They’re given the dregs in terms of location, provision, opportunities and rights whilst being ruled by the iron fist of the more privileged humankind. 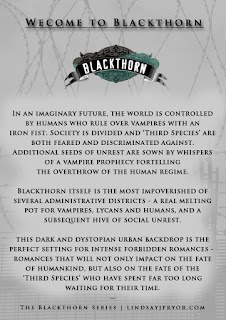 Dark, dangerous, unpredictable, but with hidden depths, the Blackthorn district is a physical representation of many of the anti-heroes that inhabit it. It’s also the idealbackdrop for the intense forbidden romances that become the catalyst for the revolution this oppressive world needs.
BLACKTHORN isn’t a series for the faint-hearted. It’s gritty, sexy and, at times, violent, so sits firmly within the adult PNR genre. But if you like your heroes edgy, your heroines willing to fight back, a complex overarching story and a new twist on an established subgenre, Blackthorn might be the series for you. Best read in order, each book builds on the previous one as the couples elicit change in the world around them. 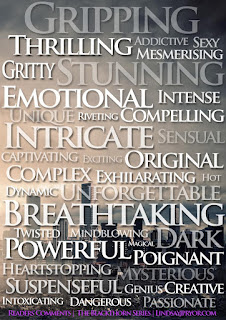 Thank you so much for hosting me today, Nerdish Mum, and for giving me the opportunity to give my series a shout-out. :-) 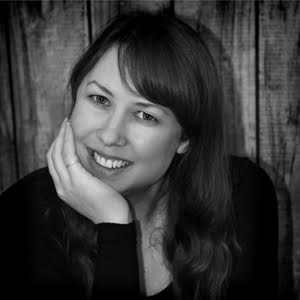 Lindsay J. Pryor is the author of seven novels in her Amazon bestselling BLACKTHORN series. Her complex, dark and gritty urban PNR has achieved numerous Gothic and PNR Amazon number ones both in the UK and the US, thousands of 5 star reviews, and more than thirty blog nominations and awards. Blood Shadows – Lindsay’s debut novel – was optioned by US film giants Relativity Media.
Lindsay has been creating stories since she was nine years old, having quickly decided that fantasy was more interesting than reality. More than thirty years later, writing remains her passion.
Lindsay is a qualified Psychology lecturer and English teacher. Before becoming a full-time author, she taught for eighteen years, primarily to improve literacy for children with special needs. She was born and grew up in Wales but now lives in England with her husband, their rescue bunny and a plethora of wild woodland creatures.
To find out more about Lindsay or her books, please visit www.lindsayjpryor.com or visit her Facebook page where she regularly chats to her readers.

What reviewers are saying about Lindsay J. Pryor…
‘I don’t think I have read such a finely executed dark PNR world before…This series truly surprised me. I didn’t think I would love it that much or be intrigued by it. I couldn’t stop thinking about these books once I was done with them… The world-building is spectacular. The characters are enthralling and addicting… Plain fabulousness.’Gaga Over Books
‘I am completely enthralled with this paranormal series. You get so wrapped up in the story and characters that you lose track of time… This is one of my favorite series so far this year!’ Paranormal Book Club
‘This is a paranormal universe like none you have encountered before… There are stories that are so powerful, so intense that I do not believe anyone should warn you about what is to come… I truly do feel that if you love the Paranormal genre and have not yet discovered Lindsay J. Pryor or these novels then you need to read them, experience them firsthand.’ Keeper Bookshelf
‘I am officially addicted to this series. Why, you ask? Because Lindsay Pryor is my kind of fearless author. She isn’t afraid to “go there”, to create characters and situations that challenge me as a reader.’ The Demon Librarian

‘Not only are Pryor’s characters and fathomlessly dark love stories fabulous, but her continual world building of Blackthorn blows me away.’ Gravetells.com

‘If you’re looking for a new PNR series that has a dark world and complicated characters, then you’ll want to grab a copy of this. I can’t wait to read the next book.’FictionVixen.com