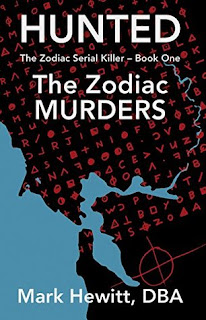 Recently I have been wanting to read more non fiction and one of my favourite things to do while ironing, cleaning etc is to watch documentaries on serial killers. It's my guilty pleasure. In turn I also enjoy reading about serial killers and so when I got the chance to read Hunted: The Zodiac Murders by Mark Hewitt I jumped at it.

I have seen documentaries on the Zodiac killer, so I knew a lot of the basic information about the killings and the investigation, I actually thought I knew quite a lot but this book certainly proved that I didn't. There is so much information that I had never heard before and so many leads which sound incredibly interesting that would have changed my perspective about the whole situation had I heard them before.

This book is incredibly well researched and is very well written, there is no sensationalising of the facts or any particularly biased opinions forced upon the reader. The author very clearly lays out the information and in chronological order which I always think is a bonus.

There were at times what I felt like information dumps, which I can imagine was very hard to prevent with how much information was being presented throughout the book, but there were two occasions I had to stop myself from skimming because I was getting too much information to process in one go. Having only two moments of this though in a long book with a lot of information is actually really good.

Overall a very good and fascinating read and one I will recommend. I am also now looking forward to future books in this series by Mark Hewitt.

Thank you very much to Genius Book Publishing for a copy of Hunted in exchange for an honest review.

The Zodiac occupies a special place in the annals of the “Serial Killer Hall of Fame.” Claiming the lives of at least 5 young victims and taunting the police in telephone calls and cryptic letters, he terrorised Northern California from 1966 to 1974 and beyond. Despite his appalling acts of violence, he was never arrested—he has never even been identified. Thousands of men have been accused; nearly 2,500 have been investigated. The police lack only the name of the perpetrator. Never has there been more passionate interest in the Zodiac serial killer. Never has there been more FOIA-released information on his crime spree and the subsequent law enforcement investigation. Yet, never before has a carefully-researched scholarly treatment of this otherwise eminently solvable riddle been attempted. That is, until now.