The 11th of April this year was the 3rd annual International Table Top Day. International Table Top Day was created three years ago as a way for board gamers around the world come together and celebrate table top gaming and this year I was able to go to an event to celebrate it. The event that I went to was Preston Table Top Day and it was held in the at the University of Central Lancashire, UK.
When we got there (finally, university campuses are confusing!) we were welcomed into the building by the organisers and pointed in the direction of the room the event was being held in. Inside were tables galore laid out ready for people to play games, game tables all ready set up for bigger games and stalls to buy table top goodies.
We stopped by was The Museum of Gaming table, who were showing some ancient games and letting people play. Me and my husband had a go at a game called from Roman times and it was so much fun. It’s very much like noughts and crosses, except that it is circular and there is a second stage in which you can then move your pieces into empty places to try and win if no one matches their three counters in the first stage. 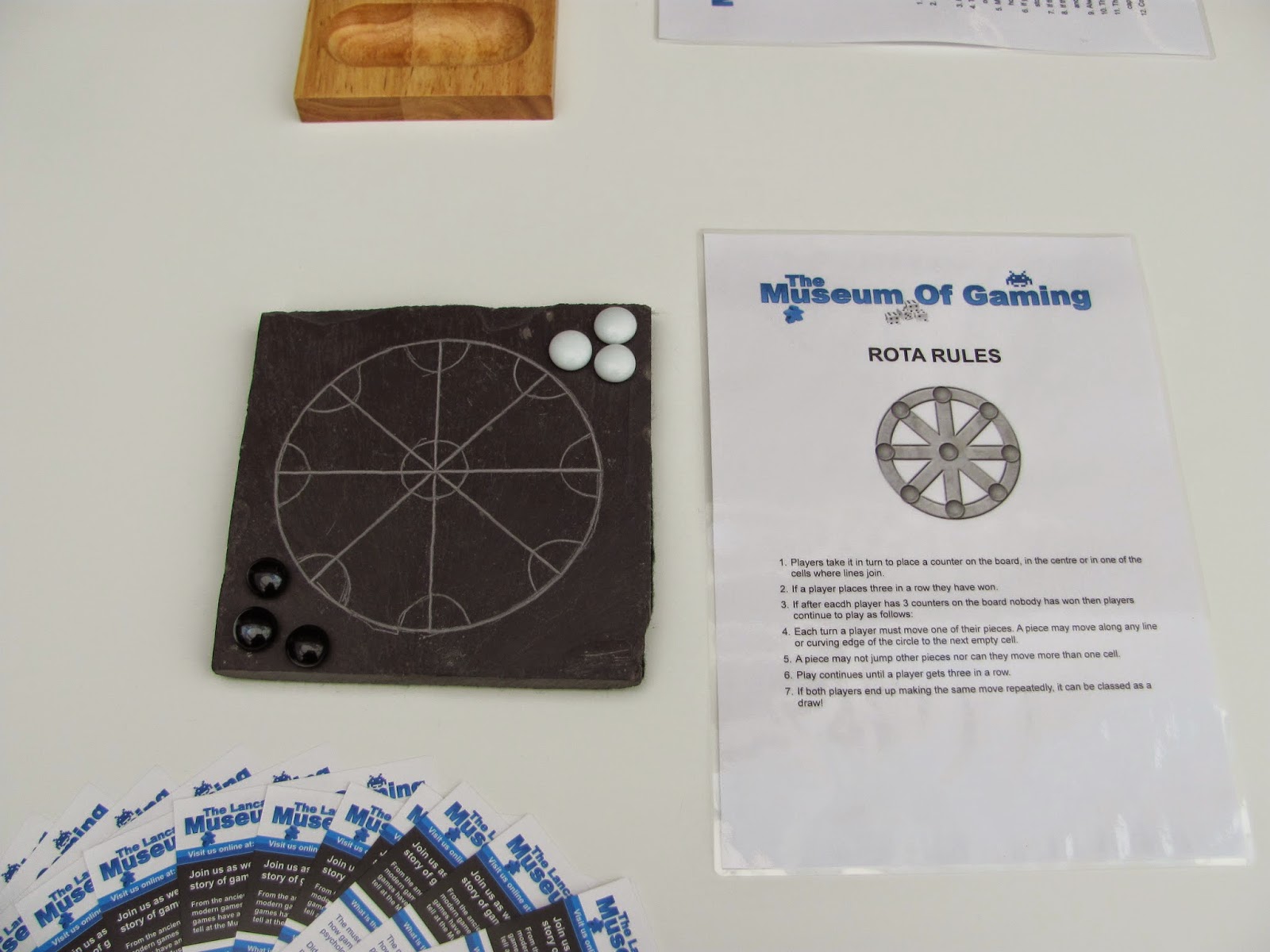 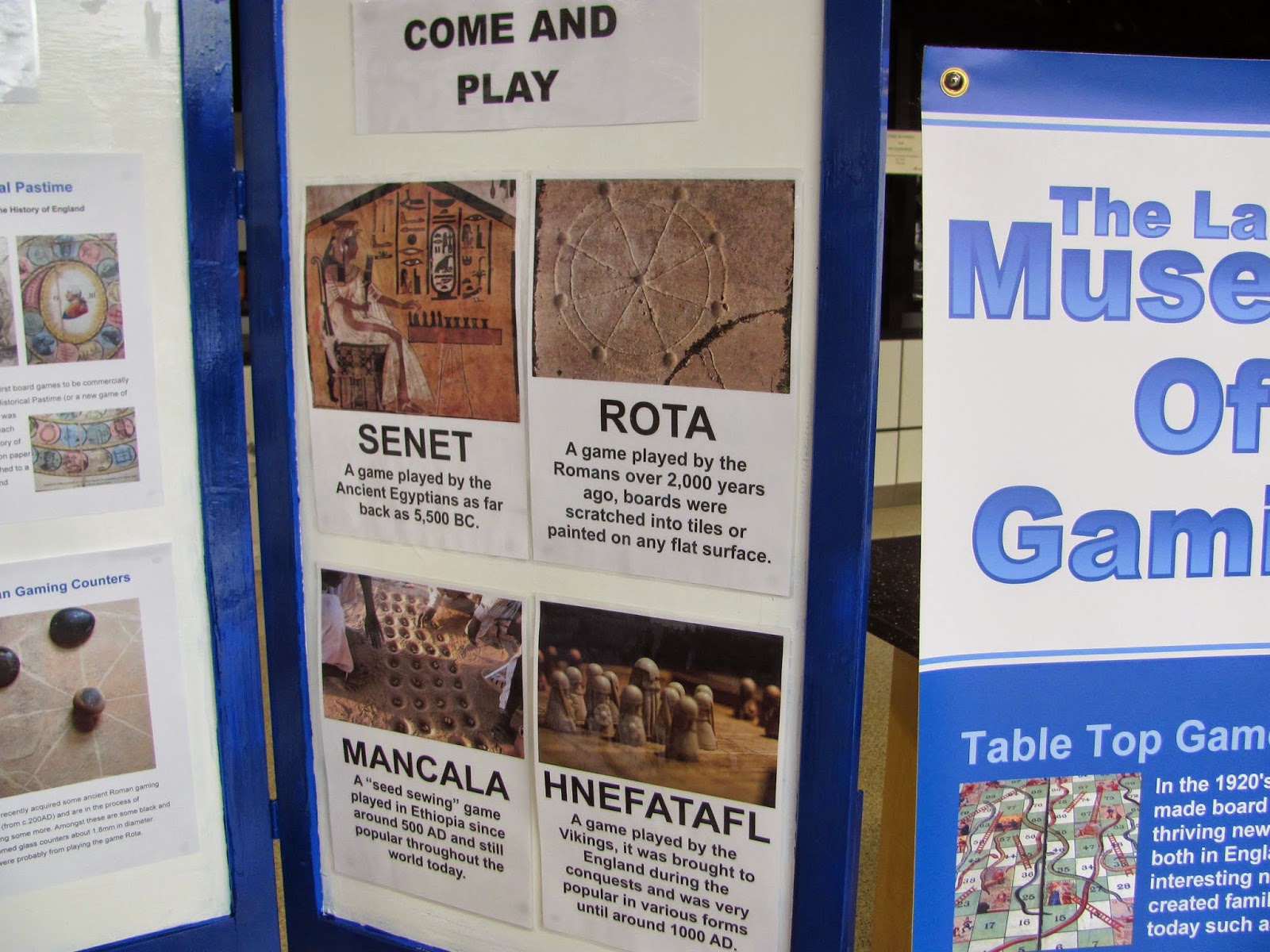 We had a look around and watched some people playing family games and a man painting game pieces. We chatted to the stall holders about games and what they suggested and our friend bought himself One Night: Ultimate Werewolf (which we played and it was awesome). The final game we played was Cube Quest, which was incredibly fun! It’s kind of a strategy game that involves flicking cubes across the board. 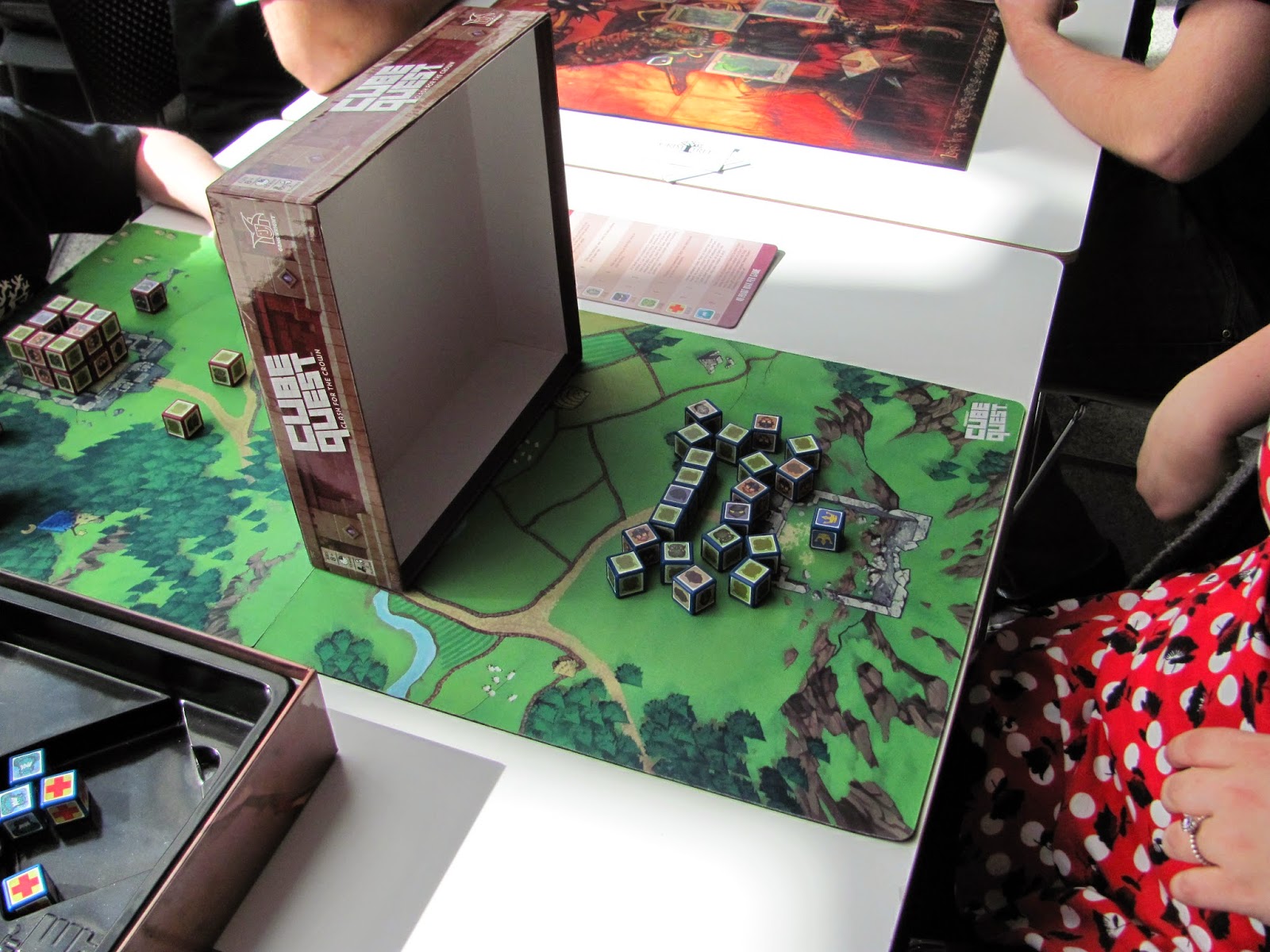 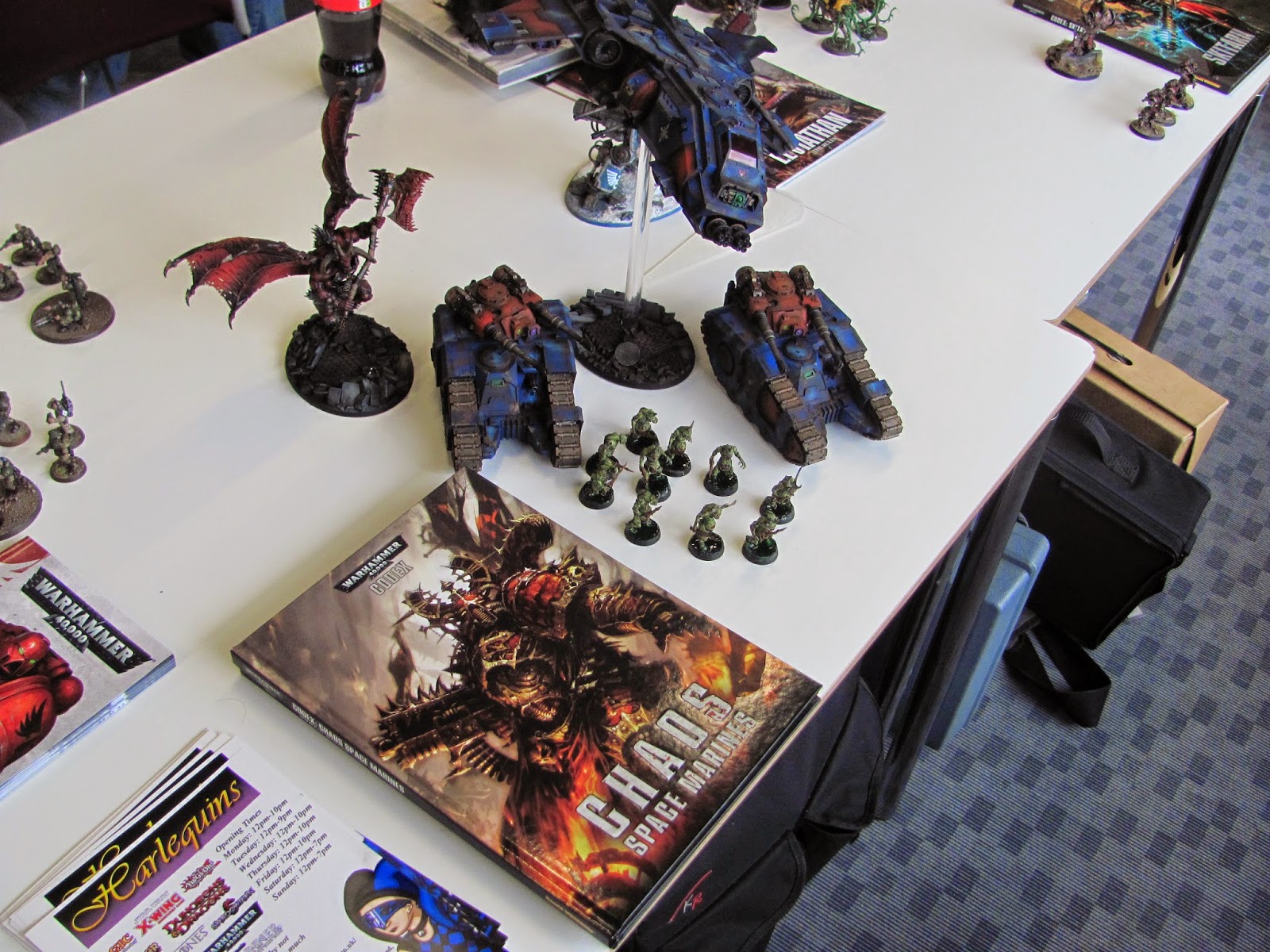 Preston Table Top Day was family friendly and I took a 6 year old and a 21 month old with me and they both thoroughly enjoyed themselves. There were so many games and activities to get involved in and there was something there for everyone. We would definitely go again and would recommend that people go and get involved on International Table Top Day. 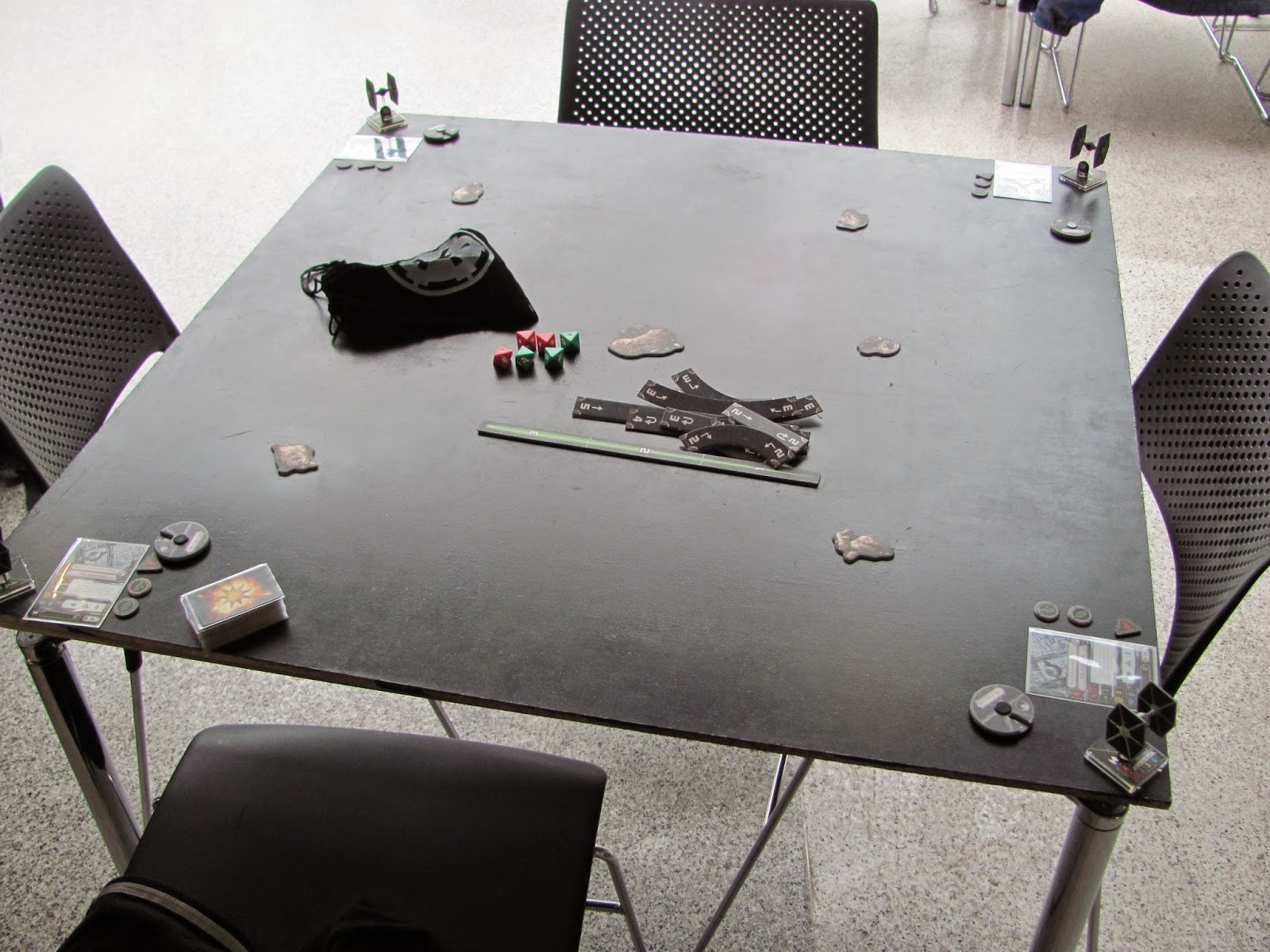 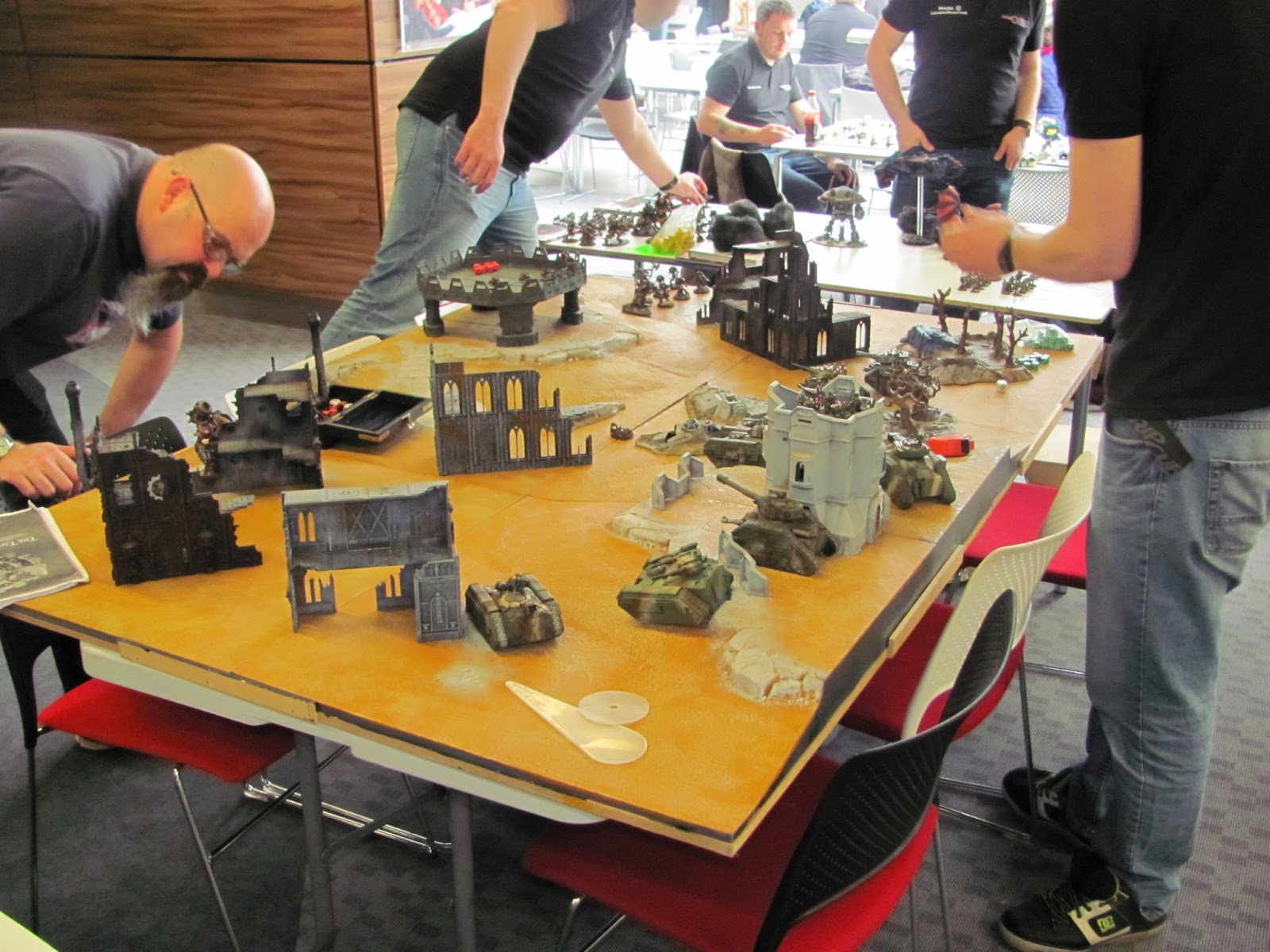 I was cheeky and asked if I could ask the organiser, Millie, some questions and she was good enough to agree:-
Can you tell me the history or story behind Table Top Day?
Preston Table Top Day was part of International Table Top Day, Wil Wheaton has a YouTube show called Tabletop (yes it’s Wesley from TNG) and they created the holiday back in 2013. I went to an event last year at Harlequin’s Game Shop, it was great. I recorded a radio show about it and was lucky enough to have a phone interview with Boyan Radokovich (the producer and “games guru” of the show) You can listen to the show here.
How did you get involved in being the organiser of the event this year?
I thought it would be great to have a HUGE event for the day and level it up from the one I went to in 2014. So I chatted to people and spoke to people on Facebook and Twitter and a lot of people agreed that it would be a good idea. So I went on to set up a Kickstarter page to help fund the event, thinking that I would just get enough to cover the cost of the venue and the insurance. We ended up with almost double the amount so we were able to get make special t-shirts for the backers, have a game designed for us, there were prizes and promotional items that were given away through a free raffle, a Pandemic tournament was run with prizes and the entrance was free for everyone who came. It also meant that the people who volunteered to help got some drinks and I was able to give them each a thank you present.
But I’ve waffled away from the question, I was the organiser because I wanted there to be a giant Table Top Day event, so I made it happen. There were some amazing people, who I couldn’t have done it without, but basically I wanted it to happen in my City so I did everything I could to make it.
Can you tell me about your day job?
I make podcasts, some YouTube videos and I write some blogs. But really I’m a stay at home mum; I take the kids to school, cook tea, load the washer and wash the dishes. There’s fun stuff too, I’m very lucky that I get to spend so much time with my family, see my kiddies grow up and spend time with my husband, it’s actually great fun.
Was there a final tally as to how many people attended?
178! The real count is a little higher, there were some kiddies there that didn’t count towards the door tally and also the vendors and volunteers aren’t in that total. But 178 people played games at Preston Table Top Day!
What is your favourite board game?
I love a game called The Resistance; it’s a social game where you’re either a spy or a Resistance member. The aim of the game depends on what team you’re on. If you’re a Resistance member, you need three successful missions. If you’re a spy, you want to sabotage three missions. Everyone’s roles are hidden; it’s a game full of social deduction, lies and convincing your friends that you’re really on their team…even when you’re not.
Will there be a Table Top Day 2016?
I think so, I’m currently deciding on if I should try another Kickstarter or if we should charge a really small ticket price and see if we can get a bigger venue or a bigger area of UCLAN.

This was originally published on the IGGPPC blog which you can view here.
Posted by NerdishMum at 20:36 1 comment:

A Non Divergent Opinion - My review of Divergent (Some Spoilers)

It's been quite a few days now since I finished this book and I finally feel that I can (maybe) put my thoughts and feelings into words. As part of the PopSugar reading challenge (see my 2015 Reading challenge) I chose to read Divergent by Veronica Roth for the topic of "A book that became a movie" I knew absolutely nothing about it (apart from that a load of people of book tube had read it) and chose it off a Goodreads list of books that became movies. My plan was to keep a lookout for it at the library or maybe wait till later in the year and see if I could pick it up somewhere, Now, my hubby obviously pays more attention to me than I thought as this is I think the second time he knew something was on my reading challenge list and when he saw the trilogy box set in a bookshop, he picked it up for me!

Going into reading Divergent, I really didn't hold up much hope of me liking it, but knew it'd be quite a quick easy read, I was so incredibly wrong! I was instantly hooked from the first page and I genuinely loved everything about this book. The characters are all well formed and have their own individual personality and identity. The world design and the idea of the 5 different factions is extremely interesting to me and I look forward to learning more about it all in the next books. I'm incredibly glad I have all three of the main books (though I now need the Four book too!!) so I can just get straight on and carry on with the story.

I'm late to the party, but how awesome is Four/Tobias?! Seriously I absolutely adore his character, though I have to admit that I thought his character was late twenties until they actually said he was only 18. I'm really looking forward to getting the book containing four novellas of scenes from the book from his perspective,

There is one thing I was really sad about and that was the death of Tris' mother. Her character was amazing, interesting and full of strength and I would have absolutely loved to have seen more of her in the following books. However the death worked well in the story and didn't feel just put in for shock value.

I cannot recommend this book enough to anyone and everyone, you all need to go out and read it. It has been the first book in a long time that I have not wanted to put down.

Posted by NerdishMum at 22:43 No comments:

A Trip Down Memory Lane - My Review of The Enchanted Wood

Choosing a book for the "a book from your childhood" section of the Popsugar reading challenge was very difficult due to the fact I loved so many books! I ended up choosing the first book in The Faraway Tree series, The Enchanted Wood by Enid Blyton.

Re- reading this as an adult, I was worried that it may have lost its charm, however I was wrong. I still thoroughly enjoyed Beth, Joe and Franny's adventures in the Enchanted Wood and up the Faraway Tree. I love the imagination and thought that went into each of the worlds that they found at the top of the tree. Each of the characters has its own personality and I particularly like Mr Whatizname as a grumpy old wizard who loves his sleep. I look forward to my little ones reading this series and seeing what they make of it.

The only things I did notice (as an adult) is that the children aren't just "mischievous" they're downright naughty. Sneaking out at night, disobeying their parents and doing things they know that they shouldn't. Though I think that my parent might be showing! There was also one story where the characters were all turned into toys and Silky was turned into a doll and everyone kept saying how pretty she was and that they wanted to take her away. This made me feel a little uncomfortable, but when this was originally released in 1939, it was a completely different time.

Overall I still really enjoyed this book and will probably now go back and re read the whole series. It brought back great memories of reading this as a child and I'd definitely recommend it to anyone.