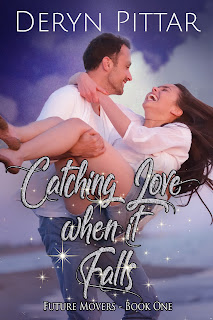 Today I am part of the blog tour for Catching Love When It Falls by Deryn Pittar, a romance with a difference. I have a guest post to share in which Deryn Pittar talks more about the creation of Belinda and the world the story is set in.

Catching Love When It Falls

William and Belinda, both genetically altered, meet years after leaving the government-rearing nursery. Their late development allowed them to escape a life devoted to the government's defence departments. If their skills are now discovered they will be conscripted and never be free again. William’s talent is to move through space between locations in the blink of an eye. Belinda can lift objects of great weight with her mind. Their relationship creates a raft of problems both struggle to overcome. ‘Catching Love When it Falls’ explores an alternative reality and discovers the one thing neither Belinda nor William can control - love.

The character of Belinda grew very rapidly in my mind, far quicker than William had. I could see her: petite, blond curls, stubborn and fiercely loyal and protective of her adopted mother.

Again the prologue shows Belinda at the Nursery, off in a corner of the playground, quietly mastering her talent of being able to lift and catch things with her mind. She’s nearly seven and is determined to be released for adoption. In the novel she has a career as a landscape gardener, a love of plants and her talent means she is able to lift heavy materials with ease, but she does this very discreetly. She also has a protective barrier she erects which rebuffs anyone approaching her with serious intent. Uninterested ‘normals’ can walk right through it, but Defense Department agents or other g-alters cannot get close. William comes across this on their first meeting and is determined to overcome it.

She is a reluctant participant in this romance. She has no wish to be wooed. She likes her life and wants to continue to live with and protect her mother since her father’s death.

I set this story in Melbourne, in the suburbs I am familiar with. Belinda’s home is mirrored from my memories of my aunt’s garden and the suburb she lived in. Her travels with William are set in places I have visited.
A couple of quirky characters enter Belinda’s life once she meets William.  Her mother likes him a lot, which helps William’s cause when he upsets Belinda by jumping with her. Never mind he had a very good reason for doing so.  ‘Not amused’ would be an understatement. Their romance could bring them to the attention of the Defense Department and Belinda is determined this won’t happen. 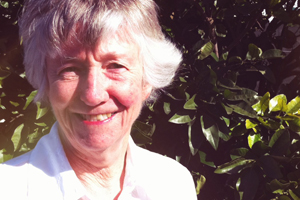 I write futuristic and fantasy fiction, spiced with romance and adventure. This allows my imagination to run free, to create interesting characters caught in unusual circumstances and events. Sometimes I have the pleasure of watching science and technology catch up with my imagination.
I also write Young Adult, short stories and flash fiction; articles on writing and I am published in these genre. I self-published a children’s rhyming book and once won a prize for a short screen script.
I’m a published poet and I endeavour to put my poetry skills into my fiction writing to enhance the word pictures I create.
I live in the Bay of Plenty, New Zealand which lives up to its name. I belong to the Romance Writers of N.Z., Tauranga Writers, and Spec.Fic.NZ (speculative fictionNZ).
Don't Forget To Check Out The Rest Of The Tour 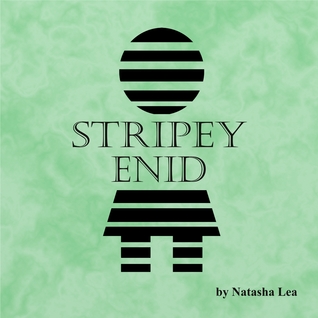 Today is Life Of A Nerdish Mum's stop on the blog tour for Stripey Enid by Natasha Lea. This unique children's book will be published on the 16th of June.

‘Believe in yourself, for you are unique!’In this ever-changing world our children are bombarded with ‘image’ driven ideals of what is accepted as normal, or what we should aspire to be.The reality is we are all unique and should be proud of it.Stripey Enid has no colour or creed, she is just a friend. Using simple verse and interactive tasks, she aims to help your child understand that it is good to be unique, and that being yourself is all you need to be.

I thoroughly enjoyed Stripey Enid. The first time I read through this with my nearly five year old mini Nerdling, we concentrated on just reading through the story and finding what the book was about. We both really enjoyed the rhyming words (mini Nerdling has been learning about these in school, so it was perfectly timed) and how easily they all flowed.

The story alone encouraged discussion as I like both fish and chips and sausage and gravy, whereas mini Nerdling thinks they are both "gross"! We talked abut how it was fine to like different things to other people and how it's good that we are all different. The language used, is also not "dumbed down" to talk to children and so there were some words, such as unique, that mini Nerdling could ask the meaning of which is a great way for children to learn.

The interactivity in the book was both interesting and fun and it was suitable for a wide range of age ranges. My favourite section was thinking about "My Good Points". This really made both me and mini Nerdling think and concentrate on what are the good things about us. I loved listening to his logic and thinking and he came up with so many we needed more paper to add more. I think one of his best was that "one of my good points is that my eyes are blue and that's good because it is my favourite colour".

Stripey Enid is really well illustrated and I thought the colours (or lack thereof) were well used. This may be a small book, but I think it makes a big impact. I also feel that any parents reading this with their children will benefit from it too, not just by enjoying watching their child get involved and think about how they form friendships and how they think about themselves, but by making them think more about them specifically, especially what are their good points!

Overall an excellent book and one I will enjoy reading over with mini Nerdling, I've also borrowed a quote from inside as a personal inspiration in my bullet journal.

I gave this book 5 stars 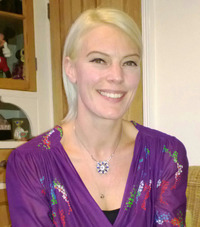 It was over 10 years ago, during a marketing exercise to promote a new theatre company whilst studying Performing Arts, that the idea of Stripey Enid came to Natasha. Even back then, Stripey was seen to be different, something to challenge the norm, ask questions of people.The idea of writing a book was never the intention but a natural progression on from the poems Natasha used to create for friends and family for birthdays & special occasions. At the time Natasha was also working with a local Brownie pack and it was this interaction that made her realise that she was an adult in these children’s lives that wasn’t a parent or a teacher but a friend, a unique friendship that benefited both parties.Stripey came into being by the pure belief that Natasha had about peer pressure & social demands creating barriers between people, stopping people from seeing others as they truly are. 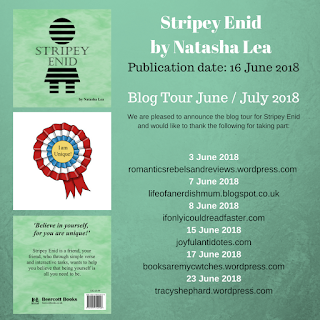