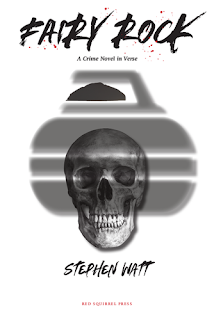 Today on Life Of A Nerdish Mum I'm pleased to share my review of Fairy Rock by Stephen Watt. The concept sounded so different and exciting, I jumped to be a part of the blog tour, so thank you to Kelly at Love Books Tours and Red Squirrel Press.


In 2017 Andrew Smith, then Director, now Chair of the Scottish Writers’ Centre, came up with a dynamic idea to run a Twitter campaign inviting poets to pitch an idea and the winner would have a poetry pamphlet published by the SWC’s publisher partner, Red Squirrel Press. Poet, critic, essayist, editor, designer and typesetter Gerry Cambridge, poet Sheila Templeton, writer, musician and Editor of both Postbox Press (the literary fiction imprint of Red Squirrel Press) and Postbox International Short Story Magazine, Colin Will, and myself took part in a panel at the SWC, ‘How to get published’ in October 2017. Andrew received many entries, a shortlist was drawn up, Stephen Watt subsequently won and persuaded me to publish a full-length collection.

Glasgow is correctly lauded for its wonderful characters and hospitality but at the turn of the Millennium it was dubbed the ‘Murder Capital of Europe’ with sectarian divisions and organised crime rife in the city. Four of its natives have been raised around the city’s Bridgeton area, cultivated by its ill-omened beliefs, and now have to separately find a way to subsist. But one crime family firmly believes in the tradition of torture and a novel way of disposing of its detractors. Who will emerge smelling of roses—or end up pushing the roses up from the earth below?

Though I absolutely love the idea of a crime novel in verse, I really wasn't sure what to expect or whether I would be able to follow what was happening. Well, safe to say I thoroughly enjoyed Fairy Rock and ended up reading it in one session as I just could not put it down!

The story was fast paced, the characters clearly defined and the prose used was both beautiful and intense. I raced through each verse to find out what happened next.

There was so much more darkness than I expected and I lapped it up! Though it covered the more typical crimes of drugs and murder, both rape and incest were brought into the story, though hard to read about, it fit into the kind of atmosphere and world a crime family belong in. The mix of gore and violence with the beauty of poetry fit together so well.

I don't know Glasgow very well, but I felt that I could easily picture Bridgeton and the kind of places the book takes place in, so good was the description. It was dark and grimy and not the kind of place you want to wander into by mistake.

I honestly am struggling to express how much I enjoyed the reading experience. It was so different and exciting, I want to recommend it to everyone! I love discovering new experiences and sharing them with people and Fairy Rock is definitely one of those things I will be sharing with other people.

Stephen Watt was born in the Vale of Leven in 1979. His awards include first prize in the Poetry Rivals Slam, the StAnza International Digital Poetry Slam, and the Tartan Treasures award. Notable collections which he has curated include the Joe Strummer Foundation collection Ashes To Activists (2018) and the James Watt bicentenary booklet Horsepower (2019). He is Dumbarton Football Club’s Poet-in-Residence and was appointed the Makar for the Federation of Writers (Scotland) in 2019. He lives in Dumbarton with his wife Keriann and pug Beanz. 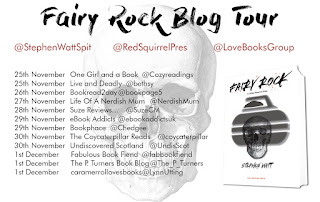 Posted by NerdishMum at 10:31 No comments: