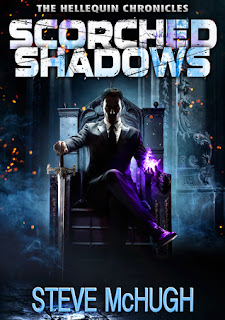 Life Of A Nerdish Mum today is taking part in the blog tour for Scorched Shadows, by Steve McHugh. Scorched Shadows is the seventh and final chapter in The Hellequin Chronicles, so be wary of reading the synopsis if you're not up to book seven yet. My review however has no spoilers so read away!

In the final chapter of the Hellequin Chronicles, secrets will be revealed, friendships will be tested, and destinies will be fulfilled.Avalon is under siege. A shadowy cabal, headed by a mysterious figure known only as “My Liege”, has launched a series of deadly attacks across the globe, catching innocent human bystanders in the crossfire.Emerging from the debris of battle, Nate Garrett, the sixteen-hundred-year-old sorcerer also called Hellequin, and his friends must stop My Liege once and for all. But powerful forces stand in their way. To save Avalon, they will need to enlist the help of Mordred, once Nate’s greatest nemesis, now his most formidable ally. But Mordred is grappling with a dark prophecy that could spell Nate’s doom…The fate of the world hangs in the balance. Even if Nate can halt the war, will there be anything left worth saving?

Being the last book in a series, Scorched Shadows was pretty fast paced right from page one, which I really enjoyed. It gets you right into the thick of it and I was instantly wrapped up in the story and found myself fully engrossed.

A minor disclaimer before I continue, I haven't read the previous books in the series and I hadn't originally realised that it was supposed to be the last book (my bad for not checking) but I decided to read it anyway because I loved the synopsis and between that, the title and the cover it had sucked me in!

I found the characters extremely strong and even though I didn't know their full back story, there was enough to fill me in and I still became attached to certain people and I really cared what was going to happen to Nate and the whole of Avalon.

I feel the ending will be extremely polarising with people loving it or hating it, with very little in-between. I really enjoyed it and thought it was a pretty ingenuitive way to end the Hellequin Chronicles.

I thoroughly enjoyed Scorched Shadows and I am now looking forward to returning to the beginning of the series and reading it as a whole, so this is a definite recommendation from me. 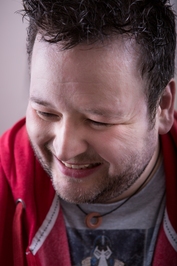 Steve's been writing from an early age, his first completed story was done in an English lesson. Unfortunately, after the teacher read it, he had to have a chat with the head of the year about the violent content and bad language. The follow up 'One boy and his frog' was less concerning to his teachers and got him an A.It wasn't for another decade that he would start work on a full length novel, the result of which; Crimes Against Magic is now available from Amazon.He was born in a small village called Mexborough, South Yorkshire, but now lives with his wife and three young daughters in Southampton. 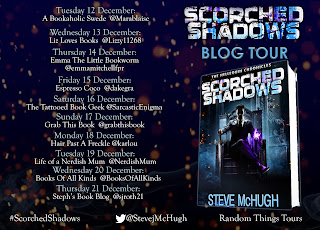 Posted by NerdishMum at 17:05 No comments: