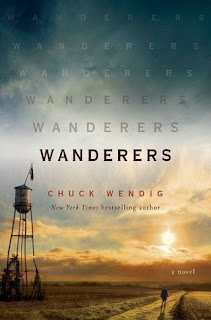 When I received an email asking if I'd be interested in taking part in the blog tour for Wanderers by Chuck Wendig, I'm pretty sure I responded before the email even finished downloading! I couldn't have been more excited to get involved in one of my most anticipated books of the year.

A decadent rock star. A deeply religious radio host. A disgraced scientist. And a teenage girl who may be the world's last hope. In the tradition of The Stand and Station Eleven comes a gripping saga that weaves an epic tapestry of humanity into an astonishing tale of survival.Shana wakes up one morning to discover her little sister in the grip of a strange malady. She appears to be sleepwalking. She cannot talk and cannot be woken up. And she is heading with inexorable determination to a destination that only she knows. But Shana and are sister are not alone. Soon they are joined by a flock of sleepwalkers from across America, on the same mysterious journey. And like Shana, there are other “shepherds” who follow the flock to protect their friends and family on the long dark road ahead.For on their journey, they will discover an America convulsed with terror and violence, where this apocalyptic epidemic proves less dangerous than the fear of it. As the rest of society collapses all around them–and an ultraviolent militia threatens to exterminate them–the fate of the sleepwalkers depends on unravelling the mystery behind the epidemic. The terrifying secret will either tear the nation apart–or bring the survivors together to remake a shattered world.

Ahh apocalyptic fiction, where have you been? It's been quite a while since my last apocalyptic novel and I honestly hadn't thought that I had missed the genre, I was wrong. I forgot just how much I enjoy being creeped out by end of the world scenarios and imagining myself in the situation and trying to plan what I would do to survive.

Chuck Wendig has taken the genre to the next level and completely modernised it. Everything felt much more intense and real because the occurrences could happen in real life at any given minute. That to me is far more scary than any fantastical or infinitesimally small chance occurrence. Some of the topics are incredibly on point in the current climate and it takes very little imagination to envision it playing out as it does in Wanderers.

When reading I usually have to identify with at least one character to fully immerse myself in the story, but in Wanderers I didn't find that. I didn't personally identify with any individual character, but I did recognise traits in each person that I could understand and that really worked for me. Everyone was flawed and that made them both human and again real.

The story itself is over a whopping 800 pages long, but I can honestly say it felt like a book half the size it read so quickly. Obviously there is a lot of lead up to what happens, with introductions to the characters, but every chapter kept me wanting to read more, just one more.

I love the darkness, I love the relevance, I love how everything is woven together. Wanderers is incredible and is a masterpiece of modern apocalyptic writing. I gave it five stars and have already been recommending it to my friends. 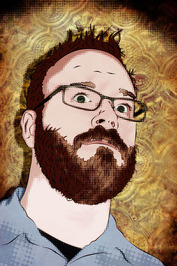 Chuck Wendig is an American author, comic book writer, screenwriter, and blogger. He is best known for his popular online blog Terribleminds, and for his 2015 Star Wars novel Aftermath, which debuted at #4 on The New York Times Best Seller list and #4 on USA Today's best seller list. As of early 2016, Wendig writes Hyperion for Marvel and The Shield for Dark Circle Comics.He was a finalist for the John W. Campbell Award for Best New Writer in 2013. 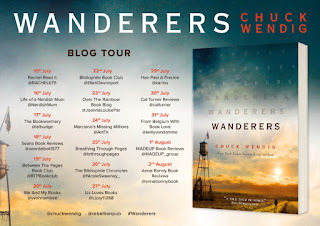 Posted by NerdishMum at 08:00 No comments: