Love In The Time Of Cholera by Gabriel Garcia Marquez 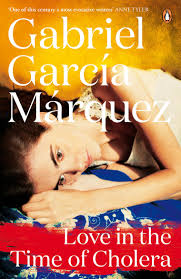 Love In The Time Of Cholera by Gabriel Garcia Marquez was my buddy readers choice for our second read along. (We're now currently reading Oliver Twist by Charles Dickens) She chose a more modern classic and it was one I have not heard of before. I have heard of One Hundred Years Of Solitude also by Marquez and I do actually own it but I haven't got around to read it as of yet. I will also admit that reading the synopsis it is not a book I would have ever personally picked up, but that's half the fun of doing this buddy read,

The story follows Florentino Ariza and Fermina Daza and how they were what I imagine could be called childhood sweethearts who separated and then came back into each others lives at a lot older age. Florentino never gives up on his love for Fermina, but she goes off to marry a successful doctor called Juvenal Urbino who was my favourite character until he died at the end of the first chapter. (This is not a spoiler the information is in the synopsis). You follow both characters as they go through through their lives, in particular Florentino and you learn about them as you read the book.

Fermina was an ok character but I just couldn't get behind her as she just seemed very selfish and childish for the most part. Florentino however I absolutely hated. His character is just awful! He is a mummy's boy and not in a good way, she does anything and everything for him and he gratefully takes advantage of this, His opinion of women was also extremely disrespectful. A direct quote from page 188 of my version "He believed that when a woman says no, she is waiting to be urged before making her final decision"....there is so much wrong with that one sentence. The worst part of him though is his relationships with over 600 women (though he claims to have saved himself for Fermina and is a virgin) and the fact that his final relationship was with a 12 year old girl. Another direct quote from page 272 of my copy "He won her affection, he led her by the hand, with the gentle astuteness of a kind Grandfather, toward his secret slaughterhouse". I really really struggled with the content of the second half of the book as it concentrated more and more on Florentino and his relationships and what happened because of these relationships ( I won't say as I wouldn't like to give out spoilers, but trust me when I say that things don't always end well).

The book itself was absolutely beautifully written and the descriptions were flowery and expressive, but it certainly worked within the story of the book. I'm glad I read it, but I'm equally glad I had someone to read it with me to keep me going through the content I struggled with.

I'm conflicted as to whether I loved or loathed this book and so I've scored it down the middle giving it three stars. For the writing style and skill I think its wonderful, but for the content, the first half is great, but the second half is just not for me. It's definitely  book that will get people talking if they choose to read it.