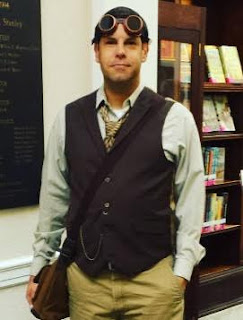 Today I am very excited to be bringing you a q&a interview with the author of Sigmund Shaw: A Steampunk Adventure and Whispers of Bedlam Asylum, Mark C. King. I have been lucky enough to have read both of his books and they are awesome,! (If you want to check out my reviews they are here and here).

The short answer is 'no'. When I was around ten years old, I tried to write a book but gave up within an hour or so - this simple experience helped me appreciate, even then, that the arrangement of words into a story is not easy. It was probably twenty years before I tried writing again, with most of that time not thinking about being an author.

An interesting coincidence happened that got me to complete my first book. I had a long drive to work, forty-five minutes or so, and I would listen to music on the way in. There was one particular album that I liked a lot and listened to regularly (Muse - Absolution). For some reason, I had the thought "what if this album was a soundtrack to a movie?" That started me putting scenes to the music while I drove to work just for fun. I came up with a bit of a story but did not think I would do anything with it. Not long after this, a fellow employee published a novel. I was impressed and picked his brain on the process. It was at that point I knew I would write the story I had been creating on my drive in.

The book is not a Sigmund Shaw novel. It is a fantasy novel that, in my opinion, is very rough and shows my inexperience at writing. The company I used to publish it is one that I think would publish most anything. I believe the book is still available, although I think it sold less than ten copies. This was probably five years before I wrote Sigmund Shaw - which I consider my first real book, The advancements in self-publishing has made the process much easier.

What is it that drew you specifically to steampunk and the Victorian era?

Reading Jules Verne and Sir Arthur Conan Doyle is what mainly drew me to this genre and era. I love their stories and the way they make the time period come alive. I also love gadgets and the steampunk genre is big on gadgets.

There is also something to be said about the vulnerability and innocence of the time period. It was just the beginning of the modern era, with machines and medicines, and that leaves a great many options for an author.

Sigmund Shaw is a wonderful character, is he based on anyone in real life, or is there any of you in him?

Sigmund Shaw is not strictly based on anyone, but I cannot deny some of my traits being included. The most prominent is his guilt for his past wrongdoings, I do not know if I would steal if I was in his situation, but if I did, the guilt would haunt me. I tend to hold onto my mistakes - maybe too much.

The character also is happy to spend time with friends and family. He does not need money or fame to be satisfied. I try very hard to have this same attitude.

Although I have never been in a life or death situation, I would like to think I would sacrifice myself for others. In that respect, Sigmund represents the part of me that I hope exists.

We've followed Sigmund on two adventures so far, what can we look forward to next?

I have a book in progress that has Sigmund returning. However, I'm struggling to call it the third Sigmund Shaw book as the main character is his niece, Sarah.

It did not take long for me to realise that Sarah is probably the most interesting character I have created and the feedback I have received is along the same lines. So, Sarah takes front and centre in a mystery in Egypt and I am very exited how it is turning out! I'm about three-quarters of the way through the first draft.

When you're not writing what do you enjoy doing?

When not writing, or working my day job, I enjoy relaxing with my wife and watching shows or movies. We have good friends and love to spend time with them. I enjoy reading and find that it inspires my writing dramatically. When time allows, I also enjoy playing sports, most anything, and the occassional video game.

I have given a lot of thought about who is my favourite author and the answer is not one, but two, Jules Verne and Sir Arthur Conan Doyle. Their brilliance is widely known and completely deserved. I have read their works multiple times and still look forward to reading them all again,

Your books are set in Victorian London, did you have to do a lot of research to make it feel as "real" as you did?

Yes, I did a lot of research to try and get a feel for the time period and the area. I hate to admit this, but not only have I never lived in Victorian London, I have never even been to London. Why write a book that takes place in a city I've never been too? The answer is that I have a hard time picturing a steampunk novel happening outside of Europe. The "Old West" is a significant genre of steampunk, but it is one that does not really interest me. My novel had to take place in Europe, particularly England.

Although I did research on terms used, habits and customs, I also looked at many steampunk artwork pieces that are on the web. Nothing puts me in the right mindset more than these incredible pictures.

One other tool that I used a lot was Google Maps. Not only did I study maps of London to know where things were, but I also used the street-view feature and "toured" London that way. In no way does this compare to actually being there, but it gave an insight into the look and feel of London that was extremely helpful. With street-view I "walked" many of the paths that Sigmund took in the story.

If Sigmund was transported to the modern day, what do you think he'd make of all the gadgets and technology as he's a bit of an inventor himself?

My initial thought is that he, like anyone from then, would be quite intimidated at first. However, once beyond the shock, I think he would be quite amazed but a touch disappointed too. There is an elegance to the clockwork gadgets that he is accustomed to that modern gadgets lack. Perhaps a feeling of regret that his talent, and that of his fathers, was a thing of the past.

Do you have a writing routine or a favourite place to sit write?

I have a full-time job, so my writing time is somewhat limited. Although I am not a morning person, I do find that I seem to be more inclined to write before work. Depending on what is going on in my head, sometimes I will write at odd times just to get the ideas out, it is not uncommon for me to email myself ideas so that I do not forget them later.

I have built myself a desk and I am hoping to turn it into my "writing area". Most of the time, I;m sitting on the couch with my laptop.

What is your favourite part of being an author?

Creativity. Some people draw or paint, some play music, some are craftsmen - I have none of those skills. Writing has given me an outlet to be creative that I feel was missing for many years. I may never become well known or sell many book, but I don't think I will ever stop writing. I love creating stories and expressing myself in this way, It is that simple,

Ok, time for one last bonus question, tea or coffee?

I enjoy tea very much, but coffee is my first choice.

An absolutely huge thank you to Mark for taking the time to answer my questions! It has been extremely interesting finding out some of the "behind the scenes" secrets.

If you would like to find out even more about Mark and his work, the link to his website is www.MarkCKing.com

Or if you would be interesting in buying either book, the links for both are