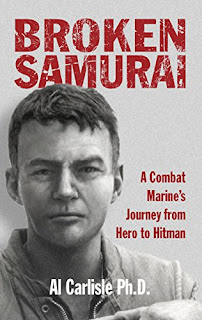 I received an advanced e-book copy of Broken Samurai: A Combat Marine's Journey From Hero To Hitman by Al Carlisle Ph.D. direct from the publisher in exchange for an honest review.

It's been a while since I have read any non fiction and when I got the chance to read Broken Samurai I jumped at it as I know very little about PTSD and even less about the Vietnam War.

The book follows interviews between Al Carlisle and Danny, an ex marine who has ended up in a very bad place following his return home.

I feel the book is very clearly laid out and the interview progression is followed in chronological order of the events in Danny's life which lead him to where he was. The questions asked of him were very clear and Danny was a lot more articulate than I had first expected from the stories of his up bringing. There are a few times when I would have liked things followed up on or more information asked for from Danny, one example being when Danny talks about being part of the biker gang and doing anything he could profitable but when he talks about his belief in the code of Bushido, the code states it does not believe in material profiting. I would have liked to have asked him how he reconciled these two statements.

The story of Danny's life is an incredibly interesting, but very sad story from losing his dad at an early age, to joining the military and being part of the battle at Khe Sanh in Vietnam and then coming home feeling lost and ending up being a hitman as part of a biker gang. Though Danny does seem to have had some problems before Vietnam, there definitely does seem to be a huge shift in both his personality and his beliefs following the war. Though reading Danny's answers myself I feel a lot of his PTSD stems from when he believes he broke his code and killed an innocent, from there he seems to spiral even further out of control than ever before.

This is definitely an interesting look into an extreme account of PTSD and I think it's an important subject that does need a lot more exposure than it currently has. Reading this book has made me want to research further into PTSD and hear other accounts as well as finding out more about the Vietnam war,  as I feel lacking in not knowing much about either.

I would have liked more information about PTSD itself as part of the book for people like me who don't have the knowledge, maybe as an introduction.

Overall a well put together, interesting book and one I will be recommending.

Broken Samurai is out today on Amazon!