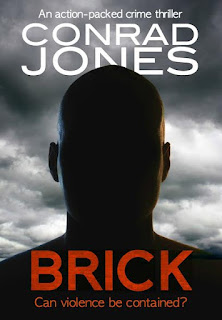 Today I am super excited to be kicking off the blog tour alongside Chelle's Book Reviews for Brick by Conrad Jones.

When a teenager is the victim of an unprovoked attack while walking his dog, a murder investigation begins. A cruel twist of fate makes his innocent family the targets of a vicious campaign of terror. As the detectives of Liverpool’s Major Investigation Team try to contain the violence, several key members of an organised crime family begin to topple, causing shock waves across the world.

Why was the teenager attacked?

And will the villains be brought to justice?

Well, where do I start with this book?

Bryn, the main character, is just a normal 14 year old boy going about his life when a chance occurrence irreparably changes his and his family's life . This book just shows how one moment can completely change everything. Bryn is absolutely lovely and throughout the book I was hoping against hope that things would work out for him. I didn't think I'd get behind a teenage boy as much as I did and that just shows how well written the character is. I actually found all the characters believable in one way or another and DI Braddick was really interesting.

It was really interesting to see gangs/crime families based in the UK as I think all other gang related books I have read have been based in America. Their workings are so intricate and how each affects the other is fascinating and just incredibly well written. It's also terrifying to think just how much influence some people can have and the lengths some people will go to. The story also shows the extreme grit and brutally of the gangland in Liverpool, so this book is not for the faint of heart!

Brick is extremely fast paced and I flew through it, following each character and seeing how all the stories intertwine and overlap. It's definitely a hold onto your pants and edge of your seat kind of read and you'll find yourself arguing with the characters when they're doing things that are beyond baffling! There are so many intricate goings on that I just can't do the story justice in any description I can come up with and I definitely don't want to spoil anything by going into too much detail.

Overall an excellent book and one I just couldn't put down. If you are a fan of grittier and hard hitting crime stories based in the UK, then this book is definitely for you! 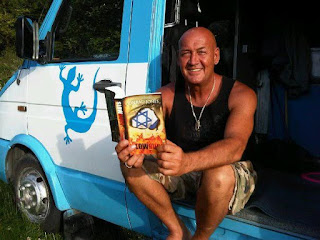 I am Conrad Jones a 50-year-old Author, originally from a sleepy green-belt called Tarbock Green, which is situated on the outskirts of Liverpool. I spent a number of years living in Holyhead, Anglesey, which I class as my home, before starting a career as a trainee manger with McDonalds Restaurants in 1989. I worked in management at McDonalds Restaurants Ltd from 1989-2002, working my way up to Business Consultant (area manager) working in the corporate and franchised departments.

In March 1993 I was managing the Restaurant in Warrington`s Bridge St when two Irish Republican Army bombs exploded directly outside the store, resulting in the death of two young boys and many casualties. Along with hundreds of other people there that day I was deeply affected by the attack, which led to a long-term interest in the motivation and mind set of criminal gangs. I began to read anything crime related that I could get my hands on.

I link this experience with the desire to write books on the subject, which came much later on due to an unusual set of circumstances. Because of that experience my early novels follow the adventures of an elite counter terrorist unit, The Terrorist Task Force, and their leader, John Tankersley, or `Tank`and they are the Soft Target Series, which have been described by a reviewer as ‘Reacher on steroids’.

I had no intentions of writing until 2007, when I set off on an 11-week tour of the USA. The Day before I boarded the plane, Madeleine McCann disappeared and all through the holiday I followed the American news reports which had little or no information about her. I didn't realise it at the time, but the terrible kidnap would inspire my book, The Child Taker years later. During that trip, I received news that my house had been burgled and my work van and equipment were stolen. That summer was the year when York and Tewksbury were flooded by a deluge and insurance companies were swamped with claims. They informed me that they couldn't do anything for weeks and that returning home would be a wasted journey. Rendered unemployed on a beach in Clearwater, Florida, I decided to begin my first book, Soft Target. I have never stopped writing since. I have recently completed my 17th novel, SHADOWS, something that never would have happened but for that burglary and my experiences in Warrington.

As far as my favourite series ever, it has to be James Herbert’s, The Rats trilogy. The first book did for me what school books couldn’t. It fascinated me, triggered my imagination and gave me the hunger to want to read more. I waited years for the second book, The Lair, and Domain, the third book to come out and they were amazing. Domain is one of the best books I have ever read. In later years, Lee Child, especially the early books, have kept me hypnotised on my sunbed on holiday as has Michael Connelley and his Harry Bosch Series.

To Connect With Conrad Jones 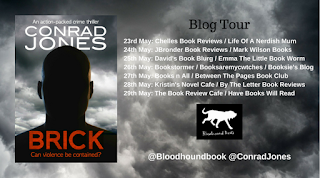