Today's post is another one talking about a super fun activity that we participated in over the summer holiday and that I wanted to share with people. As you can probably tell from the header/title I'll be talking about a Zoolab session myself and Nerdish Dad went to with the Nerdling's.

This year our local library, really knocked it out of the park with the activities that they had scheduled throughout the holidays. One of them we went to which I won't be blogging about because it was only a mini session, was a Mad Science session where the children could make slime! When I saw the animal handling session with Zoolab, I got the Nerdling's booked in immediately (tickets were only £1!!)

In our library there is a separate room which is the children's library and this is where they hold any of the sessions aimed at children. We got there early and got ourselves seats and I'm glad we did as it was very well attended. There was room for everyone, but I wanted a good spot for the pram.

Our Ranger was called Laura and she instantly took control of the room and had the children sat down and quiet, with no effort at all, which is incredibly impressive with a room full of excited children! She gave the low down on being quiet so as not to worry the animals and how important it was to wash our hands after touching any animals and she promised stickers at the end as long as the children promised to wash their hands.

I wish I could tell you word for word the whole story that Laura told to introduce each of the animals that she brought out, but the short version is that the animals had heard about Hippos (I'm pretty sure it was Hippos) that were in need, so they decided to enter a talent competition at the carnival down the road so that they could send them things they needed.

The first animal that came out was a Madagascan Hissing Cockroach. In the talent contest the cockroach had eaten all the cakes in the baking competition! The cockroach the children were handling, Luna, was actually heavily pregnant and I have been reliably informed by Laura herself that she had her babies that very night!! 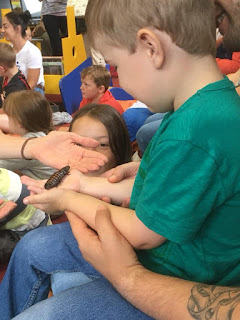 The second animal that came out was a Chilean Rose Tarantula. The children couldn't handle the tarantula as they were very nervous and we didn't want to stress them out, but Laura showed them round and made sure everyone had a good look. In the story, the tarantula was throwing balls through hoops and had heard a whispery voice, giving them hints as to how to win. 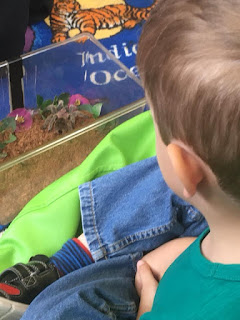 The next animal we learnt about was a white tree frog, now this we definitely couldn't handle because they tried to escape the minute Laura opened the lid. Can you imagine the carnage of loads of kids trying to catch an escaping frog!! Again though we got a really good look and the story continued with the frog taking part in the singing competition. 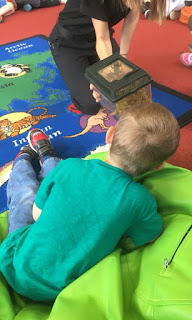 The final animal was my absolute favourite and he was absolutely gorgeous! He was a corn snake called Ozzy. He wasn't the usual gold colour either, he was a silver and it was beautiful. The kids at this point needed a reminder to keep quiet so Ozzy didn't get stressed, but considering how long we'd been there, they'd all done really well. 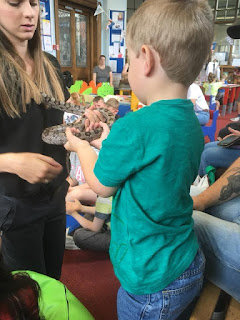 Throughout the session we learnt loads of facts about each animal and it was done it such a wonderful way, the children wouldn't have even noticed that they were learning. As an adult I loved the story and it really kept everyone engaged and it certainly made me at least laugh out loud more than once!

I'm really hoping the library keep up with the excellent bookings that they have been making as I'm loving the fun and education it's providing for the Nerdling's. If you get chance to go to a Zoolab session, I would 100% recommend that you do because they are incredibly interesting and fun no matter how old you are!

As an aside, I was so proud of mini Nerdling as originally he didn't want to touch the animals at all. He then agreed to at least stroke them, but when the animals started to come out, he was so excited and wanted to hold all of them and did a really good job of it as you can see above!

For more information about Zoolab, check out their website - here!