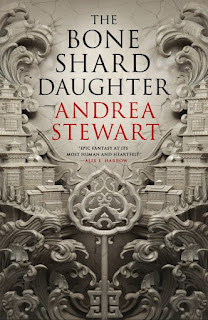 Today on Life Of A Nerdish Mum I am excited to be part of the blog  tour for The Bone Shard Daughter. A big thank you to the author and Tracy Fenton of Compulsive Readers for having me along.
The Bone Shard Daughter
In an empire controlled by bone shard magic, Lin, the former heir to the emperor will fight to reclaim her magic and her place on the throne. The Bone Shard Daughter marks the debut of a major new voice in epic fantasy.The emperor's reign has lasted for decades, his mastery of bone shard magic powering the animal-like constructs that maintain law and order. But now his rule is failing, and revolution is sweeping across the Empire's many islands.Lin is the emperor's daughter and spends her days trapped in a palace of locked doors and dark secrets. When her father refuses to recognise her as heir to the throne, she vows to prove her worth by mastering the forbidden art of bone shard magic.Yet such power carries a great cost, and when the revolution reaches the gates of the palace, Lin must decide how far she is willing to go to claim her birthright - and save her people.
My Review
Wow!! If I could get away with a one word review for this absolutely amazing book, then Wow pretty much covers it. I don't feel I've the right vocabulary for how much I enjoyed The Bone Shard Daughter, but I'll give it a go.
I really enjoy a multiple POV (point of view) story, but it has to be really well written to pull it off. Andrea Stewart is like some sort of magician with how the story flows effortlessly between POVs as well as perspectives. Each character has their own feel and voice and I didn't feel any we're interchangeable. I flew through the book because I kept wanting to know what would happen with the next person.
The characters themselves were also really well developed, even the less focal characters. I really felt like I knew each one and I was invested in their stories right from the beginning. The relationships are also done beautifully in my opinion and seem very organic and real.
The Bone Shard Daughter is a slower paced debut (and first in series) which I really enjoyed. I loved being part of the build up towards the deeper parts of the story instead big just being thrown right in the deep end. I'm chomping at the bit now, ready for the next book. I need more from the world and author!
I would really recommend The Bone Shard Daughter and the hype really is deserved for this book. I gave it 5 stars.
About The Author 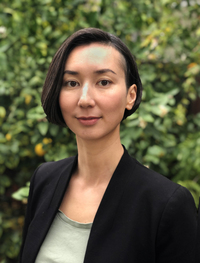 Andrea Stewart is the Chinese American daughter of immigrants, and was raised in a number of places across the United States. Her parents always emphasized science and education, so she spent her childhood immersed in Star Trek and odd-smelling library books. When her (admittedly ambitious) dreams of becoming a dragon slayer didn't pan out, she instead turned to writing books. She now lives in sunny California, and in addition to writing, can be found herding cats, looking at birds, and falling down research rabbit holes.
Don't Forget To Check Out The Rest Of The Tour 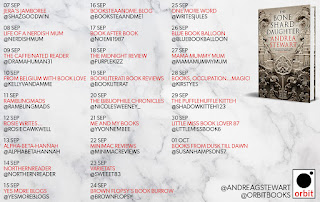