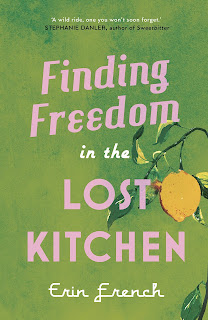 Today on Life Of A Nerdish Mum I'm proud to be part of the blog tour for Finding Freedom In The Lost Kitchen by Erin French. A big thank you to the author, publisher and Anne Cater of Random Things Tours.
Finding Freedom In The Lost Kitchen
Erin French grew up barefoot on a 25-acre farm in Maine, fell in love with food as a teenager working the line at her dad's diner and found her calling as a professional chef at her tiny restaurant The Lost Kitchen, tucked into a 19th century mill--now a world-renowned dining destination.
In Finding Freedom in the Lost Kitchen, Erin tells her story of multiple rock-bottoms, from medical student to pregnant teen, of survival as a jobless single mother, of pills that promised release but delivered addiction, of a man who seemed to offer salvation but ripped away her very sense of self. And of her son who became her guiding light as she slowly rebuilt her personal and culinary life around the solace she found in food--as a source of comfort, a sense of place, as a way of creating community and making something of herself, despite seemingly impossible odds.
Set against the backdrop of rural Maine and its lushly intense, bountiful seasons, Erin French's rollercoaster memoir reveals struggles that have taken every ounce of her strength to overcome, and the passion and courage behind the fairytale success of The Lost Kitchen
My Review
What an inspiring and emotional read. Finding Freedom In The Lost Kitchen, allows you to follow Erin French on her journey from developing her love of food and cooking to the darkest times of Erin's life, to finding herself again.
The writing is beautiful and flows so naturally, you don't realise how much you've read as it's been so easy to read. If Erin ever decided to become an author of fiction I'm sure she'd be amazing. The way she described experiences and places, really made me feel like I was there and participating. I was really involved in her life.
There are bits throughout which are hard reading due to the subject matter. Reading about addiction and what it can do to you, especially when you're so involved with the person and are rooting for them so much. Knowing the outcome definitely helped getting through those parts. I feel privileged that Erin decided to share her life with us.
An absolutely amazing read and one that will stay with me.
5 stars.
About The Author 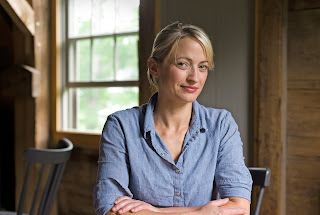 Erin French is the owner and chef of The Lost Kitchen, a 40-seat restaurant in
Freedom, Maine, that was recently named one of the World’s Greatest Places by TIME
Magazine. Booking is by postcard ballot on the first day of spring with over 20,000
postcards received last season. Erin French has written for The New York Times,
Martha Stewart Living and The Wall Street Journal. Her first book, The Lost Kitchen
Cookbook, was nominated for a James Beard Foundation Award and named one of the
best 2017 cookbooks by The Washington Post and Vogue. Erin French will host The
Lost Kitchen TV show on Joanna and Chip Gaines’ new television network, the
Magnolia Network, launching in March 2021.
Don't Forget To Check Out The Rest Of The Tour