I was lucky enough to receive an ebook coy of Murder In Absentia directly from the author Assaph Mehr in exchange for an honest review. 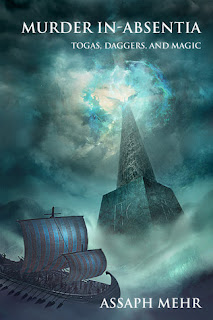 Murder in Absentia is a crime story set in a fictional city called Egretia in ancient Roman times. The main character is Felix the Fox who is a private detective of sorts, who is called upon to solve the murder of the son of a senator. He must use all his cunning, wits and magic to solve the crime.

The story is fast paced and well written and is extremely enjoyable to read. The world is well built to fit into Roman times but without being tied to anything specifically historical that may affect how the story pans out. I like how the magic works within this world and how its explained throughout, a lot of time and thought have gone into making it a realistic and workable magic.

Felix is a fantastic character as he is a "good guy" but he has his own demons and struggles with them on and off throughout the story. I feel he is a very realistic character and he is easy to relate some part of your life to. I like the way he works even when he's in the shadier side of his business.

As well as mystery, murder and magic, there is action and there's just enough of it to make things interesting without it taking over the story. The action that occurs during Felix's travels across the sea is particularly well done.

The only thing I can say in complaint about this book is sometimes there is a whole heap of information and description given at once, it kind of overloads you. But this happens very rarely, so like I say, it is only a very small complaint.

I'd definitely recommend that you go out and try this book as it's something familiar in a different package and its very well done.

I started reading this book on the 27th of January 2016 and finished it on the 9th of february 2016
I gave this book 4 Stars on Goodreads
Posted by NerdishMum at 22:11