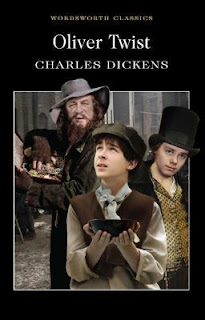 Following Love In The Time Of Cholera (my review is here), it was my turn to choose our next buddy read and I decided that as I have somehow never read any Charles Dickens, that I would pick one of his books. I decided to choose one of his more popular works which was Oliver Twist.

Firstly I will just say outright, I really dislike the over of the edition that I got for us.

Secondly I will say that I thought I knew a lot more about the story of Oliver Twist than I actually do, I thought I'd at least seen a film adaptation or something similar, but I barely knew anything about it.

I'm going to start this review a little different and give you a list of things I learnt while reading Oliver Twist.


There may have been a couple of other things, but these were the main things that stood out to me from what I thought I knew about the story.

I really struggled reading this book due to the way it was written, I had a feeling that Dickens would not be for me and I was right. It's not that it's badly written, it's just not written in a way that I like. I also really didn't like any of the characters except possibly Mr Brownlow, so I found it very difficult to care what happened to anyone and yes that includes Oliver. There's nothing exactly wrong with Oliver, but he's just so bland that he doesn't really stand out to me at all.

Overall the book was just ok and that's why I've given it three stars instead of two. It was just perfectly average throughout. The only thing that has come from this is that I can say that I have finally read some Dickens.

Our next buddy read has already been chosen and we will be starting to read it tomorrow (17/04/2016) and that is The Pillars Of The Earth by Ken Follett which is certainly more of a chunky read.