The Pillars Of The Earth - Ken Follett 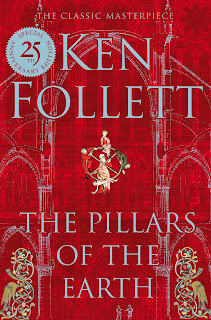 Me and my buddy reader have finished our latest read, which was The Pillars Of The Earth by Ken Follett. This time it was F's turn to choose and she managed to pick another book that I hadn't heard of even though it is incredibly popular, popular enough to have a TV show that when I checked it out on IMDB it was full of famous people!

When I read the synopsis I didn't know what to expect as it sounded very serious and the size of the book was intimidating, but F's choices so far have been a lot better than mine so I was looking forward to checking it out.

The writing is absolutely brilliant in Pillars, it is incredibly well written and flows so well. Though this is well over 1000 pages long, it really felt like it was less than half the length due to the ease of the reading. We actually found it so easy and engrossing that after a few days we upped our daily reading target from 20 pages to 40.

The characters throughout all really stand out in their own right, though I did have a couple of favourites. Tom the builder was a good man that had his faults but overall tried to do good. Lady Aliena is a character who really grows with time and becomes a really strong woman who overcomes many things to triumph in the end.

Talking about this book with F after finishing it, we discussed the fact that there are a lot of difficult subject matters covered and some that are worse than in Love In The Time Of Cholera and yet I didn't enjoy that and found it uncomfortable and I loved Pillars, The difference I found is that in Pillars, bad actions had consequences and aftermaths whereas in Cholera the bad things seem to be romanticised and shrugged off as the doings of an old man in love.

The story is well thought out and is extremely engaging. Even after we had upped our page target, I still found it hard to put the book down and wanted to see what would happen next. I particularly hate William Hamleigh, even more than Walereon Bigod. Though Walereon was slimy and devious, he didn't have the viciousness and pure evil that was in William.

The only character I can't say whether I fully liked or not was Prior Philip, One minute I thought he was great and then he did something that I just couldn't believe and I'd be disappointed in him. He was a very complex character in many ways which just shows how well developed his character is.

Overall an excellent book which surprised me no end. Who would have thought trying to get a cathedral built would be so interesting.