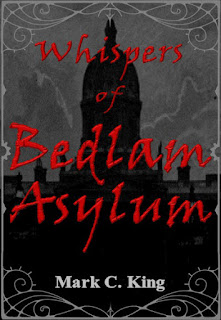 I was incredibly lucky that Mark C. King the author of Whispers of Bedlam Asylum approached me to review his second book as I had thoroughly enjoyed his first book Sigmund Shaw: A Steampunk Adventure (check out my review here).

In Whispers we rejoin Sigmund Shaw and we follow him on his journey to pay back a deal he made in the previous book. The deal leads Sigmund into trouble as usual and he needs the support of his good friend Chief-Inspector Holmes, a new badass journalist called Charlotte and an Egyptologist called Basil.

I really like the introduction of Charlotte and I really hope that we see more of her going forward. She has a very interesting back story and it is intertwined with Sigmund and his actions in A Steampunk Adventure. I'm also hoping we see more of Basil at some point in the future as he seemed to have a hint of mischief around him and he was a good sidekick to Sigmund.

The characters are so well developed and so well rounded. I genuinely can't think of a character that I don't like. Sigmund is his usual wonderful self, Holmes is grumpy and thoughtful and Sarah is so strong and bright. You don't often find a book where the character development and world building is on an even level and both are done just as well as the other, but in Whispers this is exactly what you get.

The author really got the atmosphere correct throughout the book and all the scenes in the asylum were so incredibly creepy and intense. I was reading the book at night for the most part and I had to ensure I finished reading on a section that wasn't too deep into what was happening so that I could get some sleep.

I'm trying not to go into the actual story too much as I would hate to spoil on anything, but there is one bone I'd like to pick with Mark C. King! The book is set in London, England and he calls football soccer! You can't do this in a book set in England, it really stood out to me as everything else fits so nicely. But that's just me, other people may not notice.

Genuinely I think I liked Whispers Of Bedlam Asylum even more than I liked A Steampunk Adventure and I gave that 5 stars on Goodreads. Definitely go out and read these books, you will not regret it.