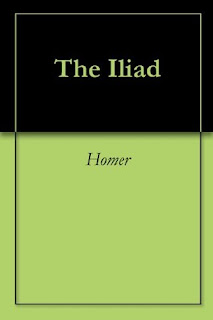 My most recent buddy read was a bit more intense than the previous few, our choice was The Iliad by Homer, translation done by Alexander Pope. It was also a little different as there was three of us working our way through this one.

When me and my buddy reader where coming near to the end of our previous buddy read (Pillars Of The Earth) when one of our friends from the IGGPPC (International Geek Girl Pan Pal Club) community got in touch to say that if we ever chose to read The Iliad that she'd love to buddy read alongside us. As it was on both our buddy read wish lists we decided to just make it our next read and then we could all get started.

When I started to read following the introduction to the first chapter/book I was really surprised to find that it was written in the form of a rhyming poem. I'm not exactly sure what I expected, it just was not this. At first I really enjoyed this as it was really easy to read and I was flying through my daily pages. After a while though I realised that I was not taking in a single word, I was just following the flow of the words without actually absorbing what was going on. I ended up having to go back a few days worth of reading to re read and slow myself down so I could know what was going on. According to research done by our newest buddy reader, this is actually one of the worst translations to read unless you already know the story inside and out.

Once I'd got into the habit of slowing myself down and the occasional use of Wikipedia, I quite enjoyed the epic tale that was told. I would definitely like to have seen more information into some stories, though I'm not 100% on the timeline so it may have not made sense at the time. I think the battles were the hardest to read as they just seemed to be a list of names rather than anything actually happening, whereas other bits seemed very graphic. As in War and Peace, people each had more than one name and it wasn't always very clear who was who. It did get easier as I went along and checked online if I couldn't figure it out, but it definitely didn't help towards the overall enjoyment.

I'm rating this book 2 stars and I feel that I am actually rating the translation/edition rather than the story itself, so maybe one day when I feel up to it, I'll find a better version and try again. But for now, something was definitely lost in translation.

Thank you to both my lovely buddy readers for getting me through this and actually concentrate on what I'm reading.