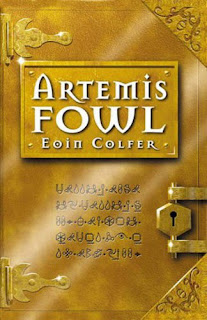 With all the excitement of my new feature, I just realised that I hadn't done a review post for mine and F's most recent buddy read which we finished at the end of July, Artemis Fowl by Eoin Colfer, We've moved onto our next read and we've gone back to the classics, choosing The Count Of Monte Cristo and I have to say since starting reading it, so many people have got in touch with me to say that it is their favourite book!

Anyhoo onto the review:

Following on from reading Iced (see my review here) we weren't sure if reading another book aimed at younger people was a good idea, but we went ahead anyway.

Artemis Fowl is I believe somewhere between middle grade (children's) and YA as a genre and I feel sadly that it's one I should have read when I was younger as it just didn't work for me and I love a lot of YA and middle grade books. I think my nearly eight year old will love it, so I will definitely pass it on to her when she's finished her current reads.

Apart from Butler, I really didn't particularly like any of the characters. Artemis was ok, but he just didn't feel like a fully formed character yet to me. Me and F discussed the possibility in the next books that they age like in Harry Potter and so the characters may become more formed and the story as a whole may become more "grown up" as the series goes along - If this does happen please do let me know!

The story itself is very well written and cleverly plotted, I just didn't engage as much as I would have liked. I am personally not a fan of fairies having technology as well as magic. To me it takes away some of the "magic" of it all. It was however very clever and I think I would have really enjoyed it when I was younger.

Overall it was an ok book and I will probably pick up the next book in the future or read with my Nerdling just to see where the story goes from here.