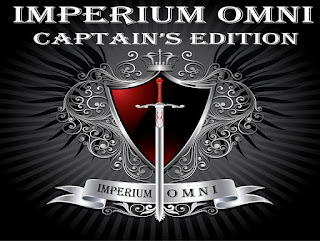 I received a copy of Imperium Omni: Captain's Edition direct from the author Matthew S Thomas in exchange for an honest review.

Imperium Omni is a fantasy story based on an RPG (role playing game) board game and I have to say I felt that it really worked. The writing was really well done and rich in detail, The world building was immersive and I could really picture myself with the characters.

To make it work for readers who play RPGs, there are certain symbols at important spots throughout the story, which you can then go to the section at the back of the book for more details. If you're not a RPG player or only play casually like myself, then you can just read on past these symbols and nothing is taken away from the story itself. As a side note, I think the author would make an awesome DM (Dungeon Master) if he plays D&D!

I really like the main character Shadow, a half elf, and I thought he was really rounded, though at times he spoke far more than necessary. We follow him on his first assignment as an Explorer and he is excited to start having adventures and seeing the world while completing his duty. He meets a whole cast of characters on the way, some a lot nicer than others as well as a love interest which feels a little forced, but it may become more natural in the next book.

The only thing I would say is that the chapters are far too long in this book, there are 468 pages and only 5 chapters. The author does explain in the introduction why they have done this, but I much prefer faster paced, shorter chapters to keep me reading. I also hate putting a book down at an unnatural break.

Overall though a really enjoyable read and one I would recommend, I will also be reading the next book in the series when that comes out.

I gave this book 4 stars on Goodreads