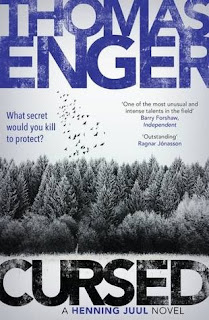 As always I am happy to be part of the Orenda Books blog tour for Cursed by Thomas Enger. I am bringing my review of this wonderful book.

When Hedda Hellberg fails to return from a retreat in Italy, where she has been grieving for her recently dead father, her husband discovers that his wife’s life is tangled in mystery. Hedda never left Oslo, the retreat has no record of her and, what’s more, she appears to be connected to the death of an old man, gunned down on the first day of the hunting season in the depths of the Swedish forests. Henning Juul becomes involved in the case when his ex-wife joins in the search for the missing woman, and the estranged pair find themselves enmeshed both in the murky secrets of one of Sweden’s wealthiest families, and in the painful truths surrounding the death of their own son. With the loss of his son to deal with, as well as threats to his own life and to that of his ex-wife, Juul is prepared to risk everything to uncover a sinister maze of secrets that ultimately leads to the dark heart of European history.

I read this book in one sitting, I could not put it down! The dual stories suck you right in and I didn't want to surface till I knew what had happened.

Cursed in the fourth Henning Juul novel, but this is the first one I have read and it can very easily be read as a stand alone. There are mentions to previous happenings, but they are very clear so you aren't left wondering what happened or if you have missed something.

Henning Juul and Nora Klemetson are absolutely wonderful characters, They are both so strong and are dealing with such a horrendous loss each in their own way, but they still carry on, they help people and keep going in their work. Their relationship was also heartbreaking to read and I couldn't help but root for them throughout no matter what had happened and no matter that Nora was in the process of moving on.

The writing and story is gritty and hard hitting. The story not only follows a mystery, but it delves into the seedy underground world of enforcers and fight clubs. Everything is covered really well and how things work is extremely well thought out. I don't want to say too much about the plot as it has been so expertly woven that I would hate to spoil anything. There were things that shocked me and when I thought I had things figured, everything changed.

I thoroughly loved this book and I will definitely be going out to pick up the other Henning Juul books so that I can enjoy more of this brilliant writing and characters. I am also excited about more books following in this series.

Thomas Enger was born in Oslo in 1973, but grew up in Jessheim. He has an education in journalism, and has also studied sports and history. He worked at the Norwegian online newspaper Nettavisen for nine years.He has composed music and written books since the age of 18. He is also working on a musical. 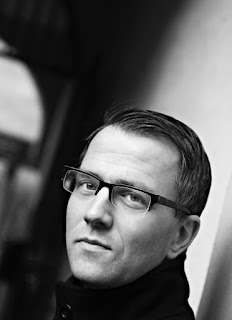 Don't forget to check out the rest of the blog tour