Don't Look Behind You by Mel Sherratt - Blog Tour Review 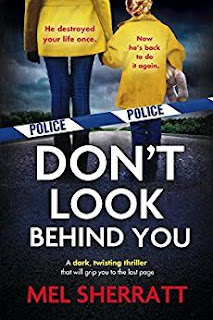 Today I am super excited to be part of the blog tour for Don't Look Behind You by Mel Sherratt!

Don't Look Behind You

She got into bed but sleep didn’t come easily. Every creak in the house made her alert. She was waiting for him to come and get her. The small city of Stockleigh is in shock as three women are brutally attacked within days of each other. Are they random acts of violence or is there a link between the victims? For Detective Eden Berrisford, it’s her most chilling case yet. The investigation leads Eden to cross paths with Carla, a woman trying to rebuild her life after her marriage to a cruel and abusive man ended in unimaginable tragedy. Her husband Ryan was imprisoned for his crimes but, now he’s out and coming for her. As Eden starts to close in on the attacker, she also puts herself in grave danger. Can she stop him before he strikes again? And can Carla, terrified for her life, save herself - before the past wreaks a terrible revenge?

This book had me on tenterhooks pretty much the entire way through and I spent a lot of time looking behind me, even in my own home!

Don't Look Behind You covers some very important and sensitive topics in domestic violence and rape. I feel like they are covered very sympathetically without sugar coating anything. Mel Sherratt doesn't shy away from showing the horror and the aftermath for both the victim and the authorities that deal with them.

I really enjoyed the character of Eden Berrisford and I loved her relationship both with her family and her work colleagues. She's definitely a tough cookie with a soft side and she was quite easy to relate to. Carla is also a pretty interesting character  and you really feel her pain after everything she has gone through and her fear is contagious as you learn more about her past and then all the things that start happening in the present.

I thought the mixture of a main story running through the book with a couple of different smaller stories worked and they were balanced really well so they all had a relevant amount of time and you weren't left wondering and waiting for too long.

Don't Look Behind You is the second book in the series, you can read it as a stand alone though there are some references to what happened in the first book. I have read this book first and it hasn't taken away my excitement to go back and read the first book and find out everything that happened there.

I really thoroughly enjoyed Don't Look behind You and I definitely looking forward to more books in the Eden Berrisford series,

To Connect With Mel Sherratt

To Get Your Own Copy Of Don't Look Behind You 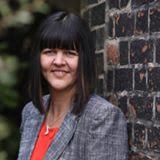 Mel Sherratt writes gritty crime dramas, psychological suspense and fiction with a punch – or grit-lit, as she calls it. Shortlisted for the CWA (Crime Writer’s Association) Dagger in the Library Award 2014, she finds inspiration from authors such as Martina Cole, Lynda la Plante and Elizabeth Haynes. Since 2012, all nine of her crime novels have been bestsellers. Four of her books are published by Amazon Publishing’s crime and thriller imprint, Thomas & Mercer and she has a new series out with Bookouture.
Mel lives in Stoke-on-Trent, with her husband and terrier, Dexter, named after the TV serial killer, and makes liberal use of her hometown as a backdrop for some of her books. 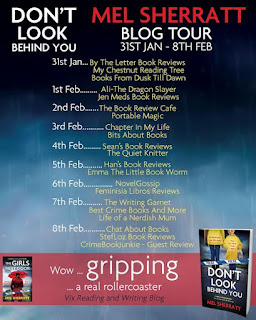