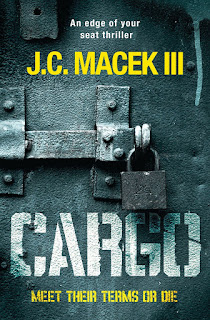 Life Of A Nerdish Mum is handing over the reins to author J.C. Macek III today as he talks about the Enigma of Calderon, a character in his new novel [Cargo].

Over the years Anthony Peterson has amassed a fortune, numerous properties, a trophy wife and a reputation for ruthless business dealings. He is a man who is used to getting his own way.

But when Peterson wakes to find himself locked in a metal shipping container, with only a cell phone and twenty-four hours of air left, he begins to unravel.

Desperate to escape Peterson soon learns that there is more to the container than he first realised. And when the kidnappers call and demand ten million dollars, while threatening to murder and rape his beautiful wife if he doesn’t comply, Peterson must fight to meet their impossible terms or face being left to die alone in the darkness.

Why has Peterson been targeted?
Who are those responsible for his kidnap?
And will Peterson make out of the container alive?

Cargo is an edge of your seat thriller about the choices we make.

Agatha Christie once wrote “Everyone is a potential murderer-in everyone there arises from time to time the wish to kill...”
In a world where everyone is a killer, how does one determine the good guys from the bad guys?
Enter the mercenary known as Calderon. Calderon is the kind of killer who never attempts to rationalize himself as a good man, yet still sees the world in different shades of evil. The man called Calderon would certainly agree with Christie’s assertion about murderous mankind, but he separates different kinds of killers by motive.
“The difference is why.” Calderon has often told himself. For Calderon the “why” had always been money. Calderon had spent much of his life following the wrong men and, being that Calderon had few scruples, following the wrong men proved never to be much of a problem. That was as long as the checks cleared. And Calderon always made damn sure his checks cleared. Money made the world go round, right? So what the hell else was there?
There was no malice, no killjoy, no bloodthirst in what he did. Killing was his proficiency. If he had proven to be the best at football, he would have pursued football. Had it been flying he would have become a pilot. Had he been blessed with the pipes of an angel he would surely have graced the covers of several worn album covers by this time in his life. However, his blessing was more in line with the homicidal arts, so he followed what he had proven to be proficient in.
Some killed for sport. Some killed for pleasure. Some killed for greed. Some killed for convenience. Others hired people like Calderon so they could kill but still keep their hands clean and pretend they weren’t killers. Weren’t they all killers? If so, what is the difference? The difference… was “why”. Why do they kill? The “why” made all the difference in the world.
You can kill a guy because you’ve been paid to. That’s a living. You don’t ask questions. Maybe he’s being killed because he owes somebody money. Maybe he’s being killed because he coveted the wrong man’s wife. Maybe he was just as bad as any killer out there, including Calderon. Or maybe he was being killed for the wrong reasons. The wrong guy at the wrong time? The difference is why.
Calderon’s descent into the underworld was not prompted by loss. Calderon’s descent was paved with proficiency and opportunity. By separating himself from the emotion of the job he was able to isolate himself from the loss of life. That is until loss of life hit too close to home. That is until the one person who truly mattered to Calderon died while Calderon was too far away to be of any help.
Because of that loss, Calderon was painfully faced with a new question… does “why” truly make any difference? Is not a person just as dead regardless of the reason? And if there is no reason… what kind of world did Calderon occupy? If the difference is why and there is no why then the world was chaos. And Calderon is a man who values his control.
It’s enough to drive even the coldest man into a depression.
It is Calderon who is called in for the very specialized operation involving Anthony Peterson in the novel [Cargo]. This operation begins with revenge and evolves into an elaborate game in which Anthony Peterson, the man in the box, must deliver ten million American dollars in ransom lest he forfeit both his own life and that of his wife. With Calderon’s involvement the operation soon becomes rife with betrayal, deception, pensive introspection, mind games and intrigue.
When faced with the bloody pasts of all interested players, Calderon witnesses the lines blurring between every killer in the game. The stakes get even higher when Calderon matches wits with a fellow killer who has her own cynical take on the reality of humankind. While Calderon’s philosophy hinges on the difference of why, his new colleague argues “When you become the truth of death, there are no consequences.”
Before the final page, the mercenary named Calderon must reconcile these opposites in order to both survive and maintain his sanity.
In adapting the original screenplay [Cargo] into a full-length novel I knew there was no choice but to expand the novel outside of the box and to add new sequences and new characters that fit perfectly into the jigsaw puzzle that lay before me. Calderon and his nihilistic philosophy are two completely original additions to the story of [Cargo] that I created to enhance, more than expand, the narrative. You won’t find him in the film version, but you may still feel his shadow once you know he was there all along.
With virtually everyone a killer to one degree or other, it is hard to call any character the conscience of [Cargo]. However, if not the conscience, Calderon does prove to embody the second thoughts of [Cargo], the regrets and perhaps even the reckoning of [Cargo]. Is there a difference of why or are there no consequences for truth?
If these are the questions there can be very little room for innocents in Calderon’s underworld of [Cargo]. 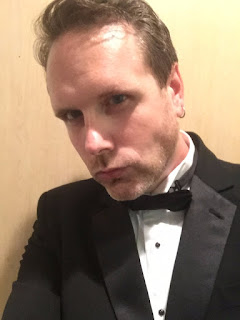 He began writing at a very young age and launched his professional writing career after graduating from Louisiana State University with a BA in English Literature.

His first noteworthy professional writing was in the world of entertainment journalism. He became a movie, TV, book and music reviewer which soon expanded to film history columns and celebrity interviews. Over the years, J.C. has become known in his professional life for interviewing bands such as The Cult, Judas Priest, Faith No More, The Zombies, Bad Religion’s Greg Graffin, Aerosmith’s Joe Perry,  Queens of the Stone Age’s Nick Oliveri and KMFDM.

After writing literally thousands of articles, columns, reviews and interviews for multiple print and online magazines, J.C. published his first novel Seven Days to Die: A Jake Slater Mystery in 2016. He followed this success in 2017 with a collection of short stories and novellas entitled The Pretty Good and Pretty Representative Stories of J.C. Maçek III. This collection continues the hardboiled detective saga of Jake Slater with the new novella The Pestilence of Spring: A Jake Slater Mystery.
J.C. is also an actor, musician, director and film producer. His most recent film is [Cargo], produced by J.C. and written and directed by James Dylan. As producer, J.C. also took the commission to write the novelization to [Cargo] which will be published by Bloodhound Books in early 2018.

J.C. lives in Southern California with his wife, daughters and a veritable zoo full of pets. He is currently working on more Jake Slater crime novels starting with the thriller Hard Core and is looking to expand the mythos of [Cargo].