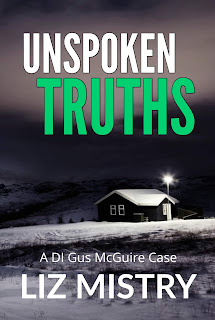 I am incredibly excited to be one of the fabulous people kicking off the blog blitz celebrating the release of Unspoken Truths by Liz Mistry, the fifth novel in the DI Gus McGuire series.


In Unspoken Truths, DI Gus McGuire and his team navigate a complex web of intrigue, espionage and murder. Set in Bradford, Manchester and on Saddleworth Moor, Gus is pushed to his physical and psychological limits.

First a rural train between Manchester and Bradford is deliberately derailed by a vehicle with a boot filled with drugs, then a woman’s tortured body is discovered in Keighley. When Gus’ brother-in-law goes missing, the investigation becomes personal. As he battles against the storms of the Beast from the East, Gus must uncover the links between the dead woman, a pharmaceutical company in Manchester and a research facility in Northern Cyprus, as well as the disappearance of his brother in law. With the body count increasing, Gus sets Compo loose on the Dark Web - how will Gus react when he discovers that things are not as they seem?

Meanwhile, DS Alice Cooper faces extreme danger in prison and, as the evidence piles up against her, Gus and his team’s loyalties are pushed to the limit.

Can Gus stop the blueprint for a deadly bio weapon from falling into the wrong hands? Can he solve a series of murders and track down a psychotic killer? Never before has Gus faced such a demanding test.

Wow! Wow! Wow! Unspoken Truths is 100% the best book in this series so far. I have loved each and every one of the DI Gus McGuire cases, but this is definitely my favourite. It's an awful lot darker than the previous books and I really like where Liz Mistry went with it.

Being the fifth book, I already knew some of the characters and their backgrounds quite well, but I learnt a lot more about them throughout this story, which is really good as sometimes in a series as you get further in, the characters can become stale. That is not the case here! In particular the strength and resilience that DS Alice Cooper shows is extremely well written and it was really quite difficult reading about what she has to endure. Also the strength of character that DI Gus McGuire shows trying to get to the truth no matter what he's dealt.

I love the fact that this series is set in places that I know really well as it adds to my immersion in the story. With the inclusion of Beast From The East and it being a real weather phenomenon we all dealt with earlier in the year, it gave an added dimension of realism.

If I had the chance, I would have happily read this all in one sitting, as when I had to put it down I spent my time wondering what would happen next.

If you haven't already read the rest of the books, I would really recommend you get on that and then you can catch up on this absolutely amazing crime series. 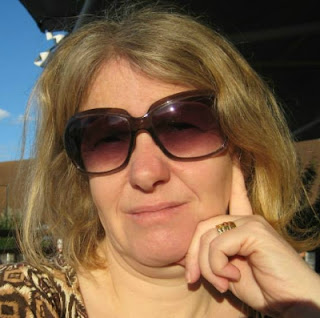 Liz writes crime fiction books set in Bradford, West Yorkshire. The DI Gus McGuire series is gritty Northern noir with a bit of Scottish thrown in.  She is currently researching for a Ph. D in creative writing at Leeds Trinity University. As part of her Ph.D she is researching how the teen killer’s voice is portrayed in the adult crime fiction novel with specific reference to the influence of teen social media usage, with a view to writing a crime fiction novel around these issues.

Liz also teaches creative writing, specialising in crime fiction and is a regular panellist at literary festivals throughout the UK.  She enjoys reading her work at Open Mic and Noir at the Bar events. She was chosen to be one of the spotlighted authors at the Bloody Scotland crime writing festival in 2016.  She is the lead blogger for the well renowned crime fiction blog The Crime warp which reviews contemporary, mainly UK based, crime fiction, comments on current issues around the genre and creative writing in general and interviews authors on a regular basis.

She is available to comment on current issues around creative writing in general and crime fiction in particular and to speak at local and national festivals and conferences.

Don't Forget To Check Out The Rest Of The Blitz 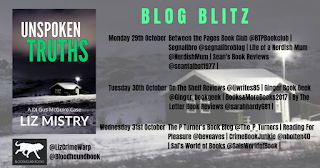