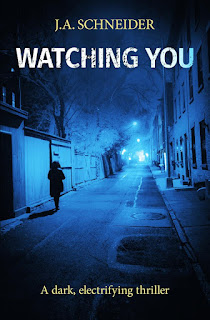 My second blog tour for today is for Watching You by J.A. Schneider, the third instalment in the Detective Kerri Blasco series.

A serial killer texts his victims first. A detective vows revenge. He comes after her. In the chill of an October night, Detective Kerri Blasco is called to a bizarre murder scene. Leda Winfield, a young volunteer for the homeless, has been shot. Her cell phone displays the frightening text, WATCHING YOU, and into her back, hideously pushed with a hat pin, is a note with the same awful message. Leda's socialite family and friends insist that no one would have wanted to harm her, but Detective Kerri isn't convinced. Until another random young woman is killed in exactly the same way. Kerri and her team profile a monstrous killer who enjoys terrifying his victims before stalking and killing them. But how does he get their phone numbers? Kerri soon finds that the killer is after her, too, and that the key to finding him may just be in the homeless shelter. When the body count rises, she vows to stop the madman - even if it means battling her own personal trauma, risking her job, her love relationship with her boss Alex Brand, and her life.

Wow, well what can I say. Another brilliant book by J.A. Schneider. I thoroughly loved the last outing of Kerri Blasco and I loved this one too.

Watching You is extremely modern and fast paced with short chapters and something always happening. The technology and things that are going on in the world around the main story are all incredibly up to date.

Things that happen in Watching You are the kind of thing that terrifies me today, how easily someone can find out everything about you, just from the internet. Where you live, your phone number, nothing is safe any more. This is all used incredibly well throughout and shows just how even the people who think they are safe are just as vulnerable.

Kerri Blasco isn't your typical main female character who is all singing, all dancing and all ass kicking, she has her own issues and is incredibly emotional. But she's no shrinking violet and can easily look after herself, it's just nice to see a character that is more balanced and having traits from both ends of the spectrum.

I flew through reading this and kept wanting to read "just one more page" because I needed to know who was doing the killings and why! Even though we meet the killer right from the get go, J.A. Schneider kept me guessing right to the end as to who the culprit was. There were so many red herrings and evidence that would fit for a lot of people, which I feel is very realistic, that I couldn't guess who it was.

Overall an excellent book and I'm already looking forward to the next book in the series!

To Get Your Own Copy Of Watching You Click Here

To Connect With J.A Schneider 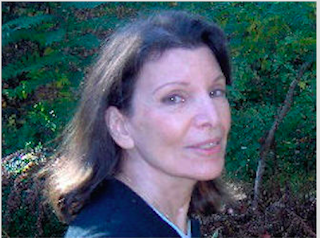 I was lucky enough to interview J.A. Schneider during the blog tour for her last Kerri Blasco blog tour so if you'd like to get to know her better, check that out here.

Wheaton College, Norton MA (French Lit Major, unofficial minor in Spanish to annoy the French Dept & squeezed in Russian)SorbonneExchange student in Soviet Union (where I got arrested for spreading anti-Soviet propaganda - ha! Wound up in a Soviet hospital cuz I fell down a ravine during a hike in the Caucasus Mts near Sochi. It wasn't bad. Docs in Sochi were nice...)Former Staffer at Newsweek MagazineIn 2016 published 1st psychological thriller FEAR DREAMS (a sensitive woman fearing insanity) & 2nd psychological thriller, HER LAST BREATH (Mari Gill wakes to horror in a strange apartment next to a murdered man, and can't remember the night before) Wife, mom, love reading & writing - especially thrillers & medical thrillers. (Doctors-&-Cops!) Decades of being married to a physician who loves explaining medical concepts and reliving his experiences means that there’ll be medical angles even in “regular” thrillers I write. I live with my bunch in s. Connecticut, USA. 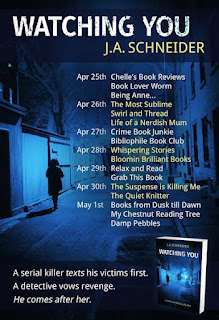