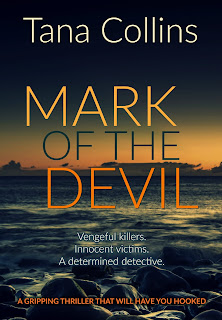 I am super excited to be helping kick off the blog blitz for Mark Of The Devil by Tana Collins. I have a really great guest post by Tana all about her main character, Jim Carruthers.

Mark Of The Devil

While Inspector Jim Carruthers and team are busy investigating a series of art thefts they receive an anonymous tip about the body of a young woman on a deserted beach.

The bizarre clues to her identity, and what might have happened to her, include a strange tattoo, a set of binoculars and slab of meat left on the cliffs.

The team’s investigations lead them to a local shooting estate and its wealthy owner Barry Cuthbert. However, Carruthers suspects Cuthbert is not all he seems and the DI soon starts to wonder if the cases of the missing works of art, the dead woman and the estate are connected.

Then when the body of a young gamekeeper is pulled from the sea tensions boil over. The trail of clues lead the team to the unlikely locale of Tallinn and into the sinister world of international crime and police corruption.

Needing answers Carruthers must look further afield than Fife. However, the closer he gets to discovering the truth the more danger he finds himself in.

Since everyone who crosses the vengeful killers seem to end up dead, can Carruthers solve the case with his life in tact?

A friend once asked me why, when I’m a female crime writer, my lead character is a male. My only response was, “my lead character was always going to be male. I have no idea why. I hadn’t ever considered him being female.”

The second question most people ask is if Detective Inspector Jim Carruthers is based on anyone I know. The answer would have to be several people in fact. What can I tell you about my lead character? Jim Carruthers is complicated. Like many of us. He’s stubborn, headstrong and wilful, forever butting heads with his superior, the long suffering Superintendent Bingham. But he’s also honest, loyal and driven by a desire for justice that will see him putting a huge amount of effort into solving his cases. He wants justice for his victims and he doesn’t sleep well at night until he gets it. Well, to be honest, he generally doesn’t sleep well anyway.

When we first meet him he’s separated from his wife but lives in hope he might be able to win her back. However, very quickly in the opening book in the series, Robbing the Dead, which I’m delighted to say became an Amazon Number One bestseller, he is pitched into investigating both the brutal and senseless murder of a young man from the RAF and the bombing of a car belonging to a controversial politics lecturer. His concern for his failing marriage has to take a back seat.

Jim Carruthers is unlucky in love. He would love to be settled and living with someone but knows deep down he is unlikely to make them truly happy. This is a man who is a loner - at heart happiest while out hill walking and wild camping. He has a lapsed membership of the RSPB, lapsed purely because he’s always too busy to get round to renewing it. He will one day. He’s also a big fan of the James Bond books and is working his way through them. And he’s both an Iron Maiden, Neil Young and malt whisky fan.

He has a great working relationship with DS Andrea Fletcher who is ten years his junior. Like any good protagonist she has her own demons. She is organised to his messy and he admires her youthful energy and fierce intelligence. The only thing that bugs him about her is that she is very nosy, wanting to know all about his failed marriage and, since Jim Carruthers is an intensely private person, he’d rather try to keep his feelings and personal history to himself. Andrea Fletcher, however, much to Jim Carruthers’ annoyance, has a way of ferreting the information out of him. In Robbing the Dead, they both have their own personal crises to deal with and turn to each other for support, which fosters their close relationship even more.

Characterisation was, for me, the hardest thing to write about and I was absolutely delighted when the Amazon and Goodreads reviews started to come in and readers commented on how much they loved the characters in my novels. By the second novel I had introduced another strong character, that of Gayle Watson, who had been drafted in when Andrea had to take time off work. And the character my readers love to hate, DS Dougie Harris, who has featured throughout the series, may have a few surprises up his sleeve for my readers as we get to see a softer side to him in subsequent books.

I do hope you enjoy reading the series. If you like fast -paced hard hitting crime thrillers, with a deeply personal side to the plot, as one reviewer describes, the Inspector Jim Carruthers series might be just up your street. 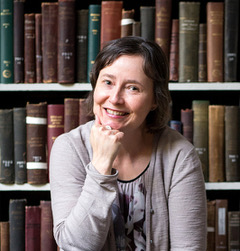 Edinburgh based Tana Collins is the author of the popular Jim Carruthers detective series set in Fife. Her debut novel, Robbing the Dead, published February 2017, became a No 1 Amazon bestseller for Scottish crime fiction.  Care to Die, the follow up in the series, also became a Top 10 Amazon bestseller. Published on 1st June 2017 Care to Die was described by Peter Robinson, author of DCI Banks,  as  “A finely plotted mystery. Tana Collins racks up the suspense on this one. DI Jim Carruthers is a cop to watch.”  In September 2017 having won one of the coveted Spotlight places at Bloody Scotland Tana supported Lynda La Plante on stage.
Her third novel, Mark of the Devil, is to be published 24th April 2018. Author Leigh Russell writes of it, "A cracking read. The suspense never lets up."
Tana is a trained Massage Therapist and Stress Management Consultant.

To Connect With The Author

Don't Forget To Check The Rest Of The Blitz 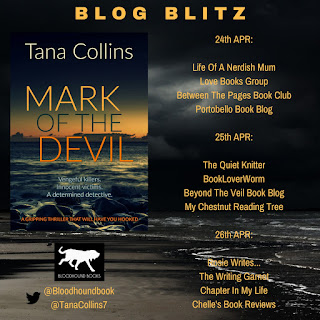