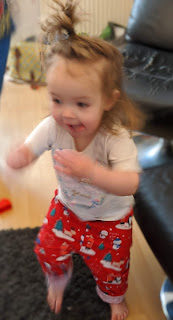 I'm a bit later today because I needed a bit of time to rest haha!

We started the day joining Joe Wick (The Body Coach) to do PE and both Nerdlings absolutely loved it and are looking forward to doing it tomorrow which is brilliant!

We then joined in with Wake Up And Wiggle with Oh Happy Sign. Baby Nerdling was very excited but very confused and was looking behind my phone for Charlotte. Charlotte is currently offering online courses so you can join in wherever in the world you are. They'll be brilliant! 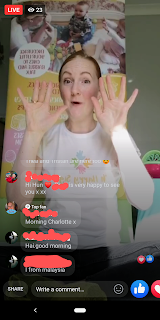 We managed to do both maths and English sent home by mini Nerdling's teacher for day 1 and while he was doing that baby Nerdling and me were learning to count with Number Zoo.

We spent some time out back running around popping bubbles which is absolutely hilarious and freeing.

Mini Nerdling's kickboxing school is now doing daily challenges, so both me and him completed today's. I was exhausted, but it was a lot of fun and felt good to be exercising.

There's was plenty of playing with blocks again for both of the kids, I've found that it's really encouraged mini Nerdling's imagination and today there were spiders and all sorts going on. 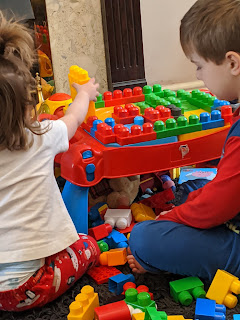 I've asked mini Nerdling if there's anything specific he'd really love to learn about while we're working together, so he's having a good think. He did ask me what Hippo's ate, so we checked that but he said that didn't count as his final decision!

We've settled pretty well into the nighttime routine now of him writing in his journal and then heading off to bed to read.

How did everyone else's first official day of schooling from home go?