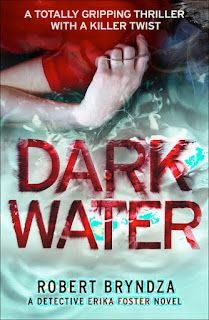 Today is the release date of Dark Water by Robert Bryndza, the 3rd book in the DCI Erika Foster series, and I have an exciting extract to celebrate.

Beneath the water the body sank rapidly. She would lie still and undisturbed for many years but above her on dry land, the nightmare was just beginning. When Detective Erika Foster receives a tip-off that key evidence for a major narcotics case was stashed in a disused quarry on the outskirts of London, she orders for it to be searched. From the thick sludge the drugs are recovered, but so is the skeleton of a young child. The remains are quickly identified as seven-year-old Jessica Collins. The missing girl who made headline news twenty-six years ago. As Erika tries to piece together new evidence with the old, she must dig deeper and find out more about the fractured Collins family and the original detective, Amanda Baker. A woman plagued by her failure to find Jessica. Erika soon realises this is going to be one of the most complex and demanding cases she has ever taken on. Is the suspect someone close to home? Someone is keeping secrets. Someone who doesn’t want this case solved. And they’ll do anything to stop Erika from finding the truth. From the million-copy bestselling author of The Girl in the Ice and The Night Stalker, comes the third heart-stopping book in the Detective Erika Foster series

It was a cold night in late autumn when they dumped the body in the disused quarry. They knew it was an isolated spot, and the water was very deep. What they didn’t know was that they were being watched.
They arrived under the cover of darkness, just after three o’clock in the morning – driving from the houses at the edge of the village, over the empty patch of gravel where the walkers parked their cars, and onto the vast common. With the headlights off, the car bumped and lurched across the rough ground, joining a footpath, which was soon shrouded on either side by dense woodland. The darkness was thick and clammy, and the only light came over the tops of the trees.
Nothing about the journey felt stealthy. The car engine seemed to roar; the suspension groaned as it lurched from side to side. They slowed to a stop as the trees parted and the water-filled quarry came into view.
What they didn’t know was that a reclusive old man lived by the quarry, squatting in an old abandoned cottage which had almost been reclaimed by the undergrowth. He was outside, staring up at the sky and marvelling at its beauty, when the car appeared over the ridge and came to a halt. Wary, he moved behind a bank of shrubbery and watched. Local kids, junkies, and couples looking for thrills often appeared at night, and he had managed to scare them away.
The moon briefly broke through the clouds as the two figures emerged from the car, and they took something large from the back and carried it towards the rowing boat by the water. The first climbed in, and as the second passed the long package into the boat there was something about the way it bent and flopped that made him realise with horror that it was a body.
The soft splashes of the oars carried across the water. He put a hand to his mouth. He knew he should turn away, but he couldn’t. The splashing oars ceased when the boat reached the middle. A sliver of moon appeared again through a gap in the clouds, illuminating the ripples spreading out from the boat.
He held his breath as he watched the two figures deep in conversation, their voices a low rhythmic murmur. Then there was silence. The boat lurched as they stood, and one of them nearly fell over the edge. When they were steady, they lifted the package and, with a splash and a rattle of chains, they dropped it into the water. The moon sailed out from behind its cloud, shining a bright light on the boat and the spot where the package had been dumped, the ripples spreading violently outwards.
He could now see the two people in the boat, and had a clear view of their faces.
The man exhaled. He’d been holding his breath. His hands shook. He didn’t want trouble; he’d spent his whole life trying to avoid trouble, but it always seemed to find him. A chill breeze stirred up some dry leaves at his feet, and he felt a sharp itching in his nostrils. Before he could stop it a sneeze erupted from his nose; it echoed across the water. In the boat, the heads snapped up, and began to twist and search the banks. And then they saw him. He turned to run, tripped on the root of a tree and fell to the ground, knocking the wind out of his chest.

Beneath the water in the disused quarry it was still, cold, and very dark. The body sank rapidly, pulled by the weights, down, down, down, finally coming to rest with a nudge in the soft freezing mud. She would lie still and undisturbed for many years, almost at peace. But above her, on dry land, the nightmare was only just beginning. 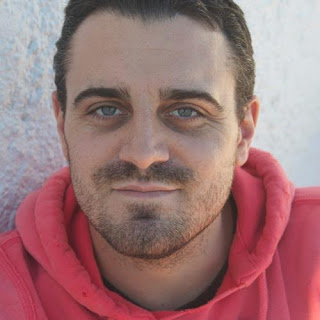