Getting To Know... Catherine Hokin 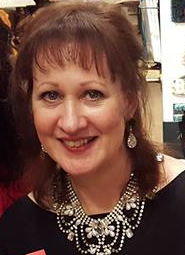 Today on Getting To Know... I have Catherine Hokin, author of Blood and Roses and all round lovely person.

Your novel, Blood and Roses, is a historical fiction novel, what is it that draws you to this genre?

I have always loved history (I did a degree in the subject many years ago) and I have always loved stories – I’ve been an avid reader since I could make sense of the squiggles on the page - so this was a logical genre for me. The beauty of fiction is that it allows you to wriggle under the facts: I’m interested in the ‘I can see what they did but why on earth would they do it…’ moments, they are what I dig into to bring my historical characters to life.

Blood and Roses centres around Margaret of Anjou who is a real person and was the wife of King Henry VI, did a lot of research go into making some details as accurate as possible?

No matter what period you write about research is king. A reader has to feel, taste and smell your timeframe and they have to be able to trust that you have done your job thoroughly or they will walk away. So, yes, a huge amount of research – a good six months before the writing starts and then ongoing as the story develops. Very often both primary and secondary accounts of a time or a specific event will give you the deed but not the reason. Or they will give you the reason wrapped in a thick coating of propaganda: ‘history is written by the victors’ is a truism not a cliché and it is a real problem with Margaret who has been demonised since Shakespeare’s day. I go to the facts to look at what was done, then I dig into the character’s head and work out what the triggers were for the murder or the betrayal or the so-carefully planned late-arrival at the battle. Social conventions and attitudes change and they need to be respected – no medieval queen mistook herself for a suffragette – but people’s motivations remain fairly constant and there’s usually sex, jealousy, money, hatred, love or sex somewhere in the mix. I get the facts, then I go digging for the stories. With Margaret there was a crucial betrayal by Jacquetta Woodville, her one time friend and ally. All the sources record it but no one explains why. So I started to wonder: why would a strong female friendship collapse to the point where it ended in such a devastating, calculated act? I had my story…
Blood and Roses is set in 1460, what is it about this time period that you find interesting?

The Wars of the Roses is a fascinating period, I have referred to it before as a medieval House of Cards and it really was. Two families, who were actually very inter-related if you step back a generation or two, pulling the country to pieces in a dynastic fight for the crown which had huge consequences for English history. Alliances changed, heads rolled, it was a bloody time and included the most brutal battle ever fought on English soil. The novel spans 1430-1480 but 1460 was a key turning point: Margaret, the Lancastrian queen, looked to be in the ascendancy but that was a fast-turning wheel.

You also write short stories with a twist, do you have a preference over writing a novel or a short story?

I love doing both! Although the short stories are about strong women, they usually have contemporary settings and allow me to play with different voices and genres: I have had a ghost story published and just completed a magical realism one. The best thing is you can enter competitions and get feedback – they are a great way to practise your craft.

Thinking about writing! I’m a movie-goer and am lucky enough to have a brilliant independent cinema and a multiplex within 20 minutes walk of my Glasgow home so all needs are catered for – I’d like to pretend I’m always watching cerebrally-challenging things but I do love a super-hero. It is the Glasgow-Havanna film festival in November so I am helping with some of the fund-raising, although that has mostly translated into sampling mojitos so far! I am secretary of the Federation of Scottish Writers and we are hoping to get a series of workshops off the ground next year looking at creative writing. And I read a lot, explore Scotland where I’m lucky enough to live and deal with a lot of questions from my two kids (one doing a PhD, the other in his final year) along the lines of: Mum, you know you’re a writer, how would you say…

Yes, definitely. I’ve had a couple of near misses years ago: one was a children’s book but then a certain wizard appeared and I didn’t have any wizards; the other was a novel about Anne Boleyn but Ms Gregory beat me to it. Like a lot of women I got buried under children and the demands of full-time work and I simply couldn’t snatch enough time to string verbal sentences together never mind written ones. I finally started getting serious (ie. finding space) when the youngest one went to university and then, this year, I got a mentorship through the Scottish Book Trust and decided to take the plunge and write full-time. That decision’s paying off in everything except money…

All your work has a strong female character, is this a deliberate theme on your part?

Absolutely - I’m really interested in women’s stories which have often been lost or misheard or, in the case of Margaret, twisted by propaganda. I write about women who interest me, women who have faced challenges and had to make tough decisions, who have often been denied access to power even though they would have wielded it well. It’s not just me – if you look at series like Game of Thrones where the women have stopped being decoration and stepped centre-stage, or The Good Wife and Jessica Jones, it’s clear that people want these new perspectives. Maybe there’s a bit of Lady Macbeth in all of us.

Do you have a set place that you like to sit and write?

I have a study and I love it. My desk is in the front of a window looking out onto the River Kelvin, although admittedly I’m usually squinting through rain as this is Glasgow. I have an internet radio permanently on, my favourite movie posters on the walls and a sofa for when I’m ‘thinking’ (that’s my excuse). And if I need a change of scene, the wonderful Mitchell Library is 10 minutes down the road. It’s a pretty good existence. 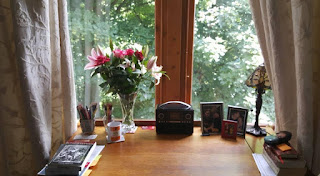 It’s too hard to choose one! I love Angela Carter, Wise Children is my go-to comfort book and Margaret George, whose books started me down the historical writing genre. I’m also a huge Kate Atkinson fan and Terry Pratchett whose books have recently led me to Neil Gaiman’s incredible American Gods. Then there’s Joanne Harris and Jane Harris – I need to stop.

My second novel centres on Katherine Swynford and her long-standing affair with the twice-married John of Gaunt, Duke of Lancaster and son of Edward III. There are lots of interesting things about Katherine’s life, not least that she was the poet Chaucer’s sister-in-law, but one of the most fascinating is that she is incredibly absent from the period’s chronicles and that makes no sense. That started nagging so I went digging. Katherine lived in a time when propaganda was beginning to emerge as a strong political tool, when royal mistresses were not well-treated by the chroniclers and when John of Gaunt was widely-reviled as the cause of everything from plague to poverty. Change the angle of your gaze and her absence starts to look rather strange or, perhaps, rather deliberate. I have just signed with an agent for this novel so hopefully there will be news soon!

Thank you so much to Catherine for answering my questions, I'm looking forward to more news about her next book! 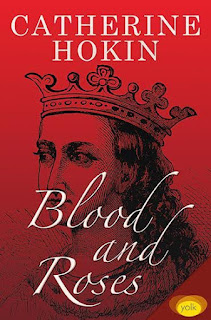 A novel of Margaret of Anjou and her pivotal role in the Wars of the Roses.1460:The English Crown – a bloodied, restless prize.The one contender strong enough to hold it? A woman. Margaret of Anjou: a French Queen in a hostile country, born to rule but refused the right, shackled to a King lost in a shadow-land.When a craving for power becomes a crusade, when two rival dynasties rip the country apart in their desire to rule it and thrones are the spoils of a battlefield, the stakes can only rise. And if the highest stake you have is your son? You play it.