The Revenge Of Tirpitz by M. L. Sloan - Book Extract and Author Q&A 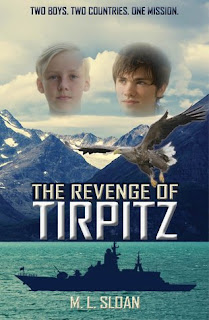 Today I'm very lucky to be bringing an extract from The Revenge of Tirpitz as well as a Q&A with the author M. L. Sloan (Michelle).


Your book, The Revenge of Tirpitz, is written with a dual timeline of modern day and 1944 during WWII. What is it that draws you to that specific time period?

It’s actually the little things that fascinate me - the lives of everyday people and how they coped and lived through the fear and restrictions imposed upon them during wartime. And then there’s the extraordinary bravery and commitment at that time to the cause. I suppose I relate it to myself - could I put myself in the position of the men and women who put their lives on the line?

Did a lot of research go into getting the historical facts right in The Revenge Of Tirpitz?

I did an enormous amount of research on everything from radar to life in occupied Norway 1944, to the Sami people and of course Tirpitz herself. I knew that I was weaving fiction and fact together to create a pacey thriller but it was important to me that it was authentic and as plausible as possible.

You have also released a picture book, The Fourth Bonniest Baby In Dundee, what was the inspiration behind writing this book?

You couldn’t get two more different books could you?!! And it’s fun promoting them both at the same time!!!  I’m doing school events at the moment and I’m with infants with Bonnie Baby and then dashing up to the upper end of the school with Tirpitz! Bonnie Baby came about after I entered my son into a Bonnie Baby competition here in my home town of Broughty Ferry. He came fourth which I thought was funny and so I decided to embellish the story and turn it into a rhyming picture book.

Inga in Tirpitz is one of my favourite characters and she only features in one chapter! She’s from the Mountain Sami, is a reindeer herder and is preparing to make the journey across country. She’s confident and focussed; I like her spirit.  I would love to write a ‘spin-off’ story about her.

You originally trained as a primary school teacher, does that experience help or influence you in writing children's books?

Actually, if I’m honest I don’t know if that really helps the writing process. It definitely helps the promoting of the books as I’m in schools running workshops for children of all ages. And I also have a separate Drama degree so that helps make the workshops interactive and fun. Writing the books, for me, is about losing myself in the voices of the characters for an evening! Almost embodying them. It’s a bit trancelike because you lose all concept of time!!

When writing, do you have a set routine or ritual that you follow?

Once I’ve committed myself to an idea, I am disciplined and sit down for an hour or two in my evenings or if I’m lucky an occasional morning or afternoon and get my head down. And then surface two or three hours later in a bit of a daze!!!

You once performed a one woman show in Edinburgh, can you tell me more about it?

I studied Drama and Theatre Arts at Queen Margaret University in Edinburgh as a mature student and in my final year one of the students ambitiously put together a Canadian play festival. I performed the first European performance of Nicole Zylstra's 'Firebird: 220 Horses of the Apocalypse’ which was a reinvention of 'Medea' transposing the action to Brooks, Alberta. It followed the journey through life of a young woman armed with nothing but a magic 8 ball and a pack of tarot cards!! I found it terrifying, exhilarating and ultimately hugely satisfying to perform on my own for an hour. I look back now and can’t quite believed I did it!

Housework!!! Running around after three children!  No, seriously, I love theatre - everything from musicals and Shakespeare, to contemporary, edgy physical performance. So whenever I get the chance I head to my local, wonderful theatre, Dundee Rep. Or down to Edinburgh. I read of course too!

Several! From Charlotte Bronte, to Rosamunde Pilcher, from John Masefield to Susan Hill,  I have a selection of ‘comfort' reads: books that I revisit either on a seasonal basis or if I need to feel grounded in some way.  That, for me, is the joy of books. Not only can they educate, illuminate and inspire, they can make you feel better on different levels.  Like a pair of comfy socks or a good cuppa. Read yourself better, I say!

What can we look forward to from you next?

I’ve been so busy promoting both books that I’ve not really had a clear mind to focus on what to do next.  I love the research involved in historical fiction - it’s really joyful to lose myself in some period from history; I find it comforting. So I just need to decide on a time frame or key moment in history and get going!

Thank you so much to Michelle for answering my questions! Now onto the extract which I have to say is absolutely amazing.