Getting To Know... Shalini Boland 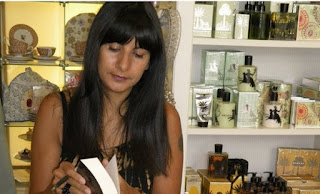 Today on Getting To Know... I have the extremely talented Shalini Boland, author of The Girl From The Sea (which I reviewed earlier this year, see HERE) and of the upcoming psychological thriller, The Best Friend.


You write psychological thrillers and dark YA books, is there anything in particular that draws you to the darker side of writing?

It's true. I do find the darker side more interesting and entertaining to write about. My teens were spent watching horror movies with friends, trying to spook one another, and I also loved reading all of Anne Rice's Vampires and Witches series. After all, who doesn't love a good scare now and again! That said, I do read the occasional chick lit novel to balance things out.

You have written both stand alone novels and book series, do you have a preference between writing one of the other? Or does it depend on genre?

My YA books are all series, and this was purely down to my readers. Book One in each series was written as a standalone, but my readers wanted more, so I expanded each one into a trilogy. There is definitely more pressure with series to get each book out very quickly.

You have also written a children's book, A Shirtful Of Frogs, which deals with time travel. What was the inspiration behind this story?

This book was a labour of love. It was inspired by my father-in-law's terrible experiences as an evacuee during WWII. He was only five at the time, and I can't believe what he went through. I gave the story a magical twist as the truth was a little too bleak for a children's story. It's great to have his experiences recorded for the family, and for others to read.

As well as being an author, you also run eBookSoda, can you tell me more about that?

I think I set this up in a moment of madness! It's an ebook promotion website. Authors and publishers get in touch with us when their books are going to be free or on offer, and we send the deals out to our subscribers - avid readers, hungry for an ebook deal. As an author, I thought it would be a great tool to help me and other authors promote our books directly to readers. And, as a reader, I'm now never short of great books to read!

Before becoming an author, you were a successful singer/songwriter and you worked with some very well known artists. Will we ever see a return to that industry?

Nope! It was an exciting chapter in my life, perfect for when I was in my twenties and early thirties. But once my kids came along, I couldn't bear to spend vast chunks of time away from them, so I left it all behind and started concentrating on novel writing. Now, I just sing in the car.

Do you have a set routine when you're writing or are you lucky enough to write anywhere at any time?

When I start a new book, I try to write every single day until it's finished. I get home from the school run, get the household stuff out of the way, make a coffee and sit down on the sofa with my laptop, dog at my feet. This is my set routine when writing, but things are more haphazard during the editing/planning/promoting period.

I love my character Mia (The Girl from the Sea), because I felt like I went on a journey with her, and, even though I wrote it, I was just as shocked at how things ended up. From my YA stuff, it has to be Madison (Marchwood Vampire series). She's feisty and tough, brave and straight-talking - nothing like me!

Working on eBookSoda, chatting with my kids and husband, or curled up in bed reading.

I have many, many favourite authors. Anne Rice, Paullina Simons, Lainy Taylor, and I've recently been enjoying Sarah A. Denzil's pychological thrillers.

Your newest psychological thriller The Best Friend is out on the 20th October, but what can we look forward to next from you?

I'm currently plotting out my next thriller. Its working title is The Perfect Marriage and it's about a married woman who finds herself in a terrible, no-win situation. I'm excited to start writing it. Hoping it will be out next spring!

Thank you so much to Shalini for answering my questions in the busy time coming up to the publication of her next book. 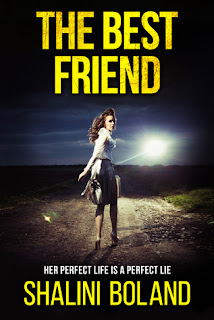 They say to keep your friends close and your enemies closer . . . Wrong.Louisa’s new best friend has it all – the house, the status, the money – but she’s also hiding a dark secret. And, as Louisa is drawn deeper into her friend’s life, events take a chilling turn . . .